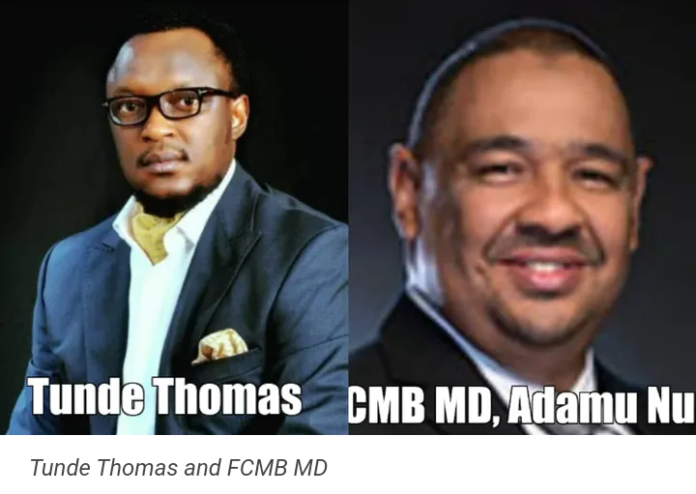 Few days after Mrs Moyo Thomas cleared herself of not been responsible for her husband’s death, late Mr Tunde Thomas, as been accused to have an affair outside marriage with her Manager (FCMB MD), Which led to FCMB MD been the biological father of her two kids. It was revealed that Mrs Adam Nuru, the lovely wife of the FCMB MD has filed for a divorce as she also moved out of her marital home.

This came from a family sources who spoke to SaharaReporters as he claims that Hauwa has moved out of Nuru’s house and has likely informed her lawyer to prepare divorce papers so she could leave the marriage.

A source told SaharaReporters: “I know she has moved out. This case is beyond Moyo or the late Tunde. His own marriage is about to crash now. The wife and her family are really giving him problems. They are ready to deal with him. The Moyo stuff is part one, he is currently facing the second part with his wife.”

The sudden display of action came after the FCBM MD, Adam Nuru embarked on a voluntary leave following the alleged paternity scandal that has rocked social media for weeks now. Also many Nigerians had petitioned FCMB to strip Nuru of his position for his crime of fathering the 2 kids of his married staff by name Moyo Thomas, which was also believed to be the cause of her husband’s death, as her husband, Tunde Thomas was said to have dead of heart attack few days after hearing the news of not been the biological father of his kids.

So as the FCMB carries out an investigation, Mr Adam Nuru (FCMB MD) took a voluntary leave but it’s not going to help matters as hd will still face the heat on the home front as his lovely legally married wife is allegedly planning to leave him.

Met Gala 2021: Here are photos from the red carpet