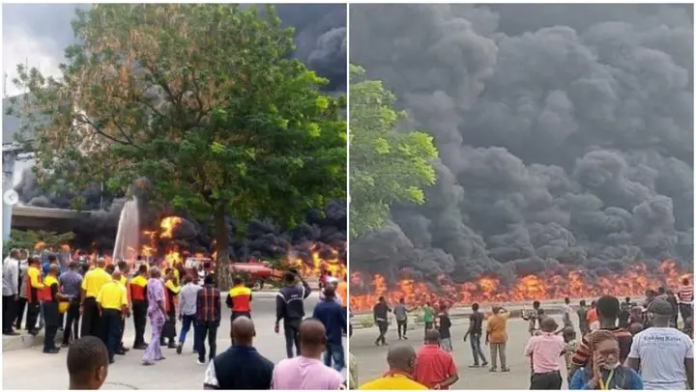 Today, it was sadly reported some that part of Oshodi/Apapa in Lagos is on fire as a full loaded petrol tanker, which conveyed a total number of 44,000 litres of Premium Motor Spirit (PMS) has gone up in large flames at Toyota bus-stop inwards Mile 2 along Oshodi/Apapa Expressway, Lagos, Nigeria.

This sadly happened due to a face to face clash between the fully loaded tanker and another big trailer loaded with iron in motion, so due to the hit, the loaded trailer with Premium discharged its deadly contents, which led to a heavy fire outbreak that took over a hug place in Lagos.

Immediately, Emergency response teams which included the federal fire service that made response as the arrived on time at the scene of the incident.

The Incident was confirmed by the National Emergency Management Agency (NEMA), saying the structures at the Oshodi-Apapa Expressway, where a tanker explosion occurred today at 9:15am, has been “badly affected.” The incident occurred opposite the Lagos State Fire Service Station located in the area, which led to a prompt intervention of the fire service personnel.

In addition by Ibrahim Farinloye, the Acting Zonal Coordinator, South-West Zonal Office when giving his update on the event, stated that the road has been badly affected.

In his words (Ibrahim Farinloye) he said: “The road structures are badly affected. Efforts are on to carry out integrity tests on them, especially the pillar of the bridge linking the Airport from Apapa – Oshodi way,”

Also Mr Farinloye added that no casualties were recorded in the incident.

Meet the 24-Year-Old Beautiful Daughter of Alaafin of Oyo as She...