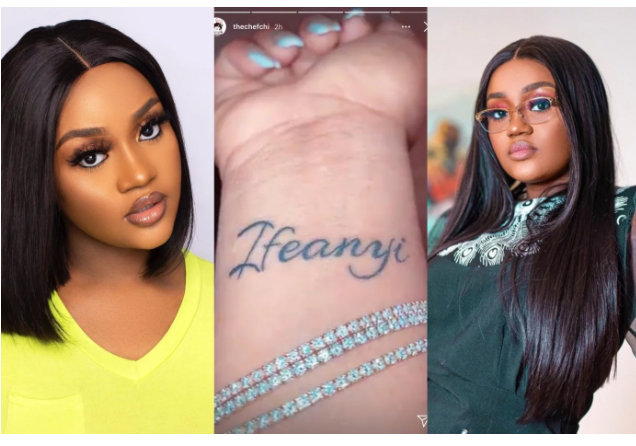 Beautiful Chioma Avril Rowland popularly known as Chefchi is a Nigerian socialite. She was born on 1st May 1995 in Owerri, Imo State in the south eastern part of Nigeria.

Chioma got engaged to a famous David Adedeji Adeleke, better known as Davido, who is an American-born Nigerian singer, songwriter and record producer. They are happily blessed with a healthy son, Ifeanyi.

Davido and Chioma made their love affair public as far back as 2017 during the Chef’s birthday party where Davido gifted her a brand new car.

Davido’s fiancée, Chioma Avril-Rowland has taken her love for their son, Ifeanyi to another level by tattooing his name on her body as seen below.

The 25years old lady, mother of one and chef via Instagram posted a short clip of her tattoo that spells the name of their son.

She inscribed the name, ‘Ifeanyi’ which in Igbo language means nothing is impossible with God on her hand.

Nigerian celebrities, fans console Denrele Edun after he revealed how he...