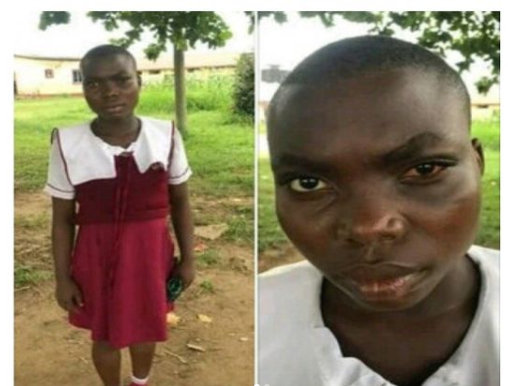 A 14 years old girl who was allegedly brutalized by her step father and step brother, for allegedly resisting r*pe has been rescued in Akwa Ibom.

Salome Uwem was physically assaulted by the two men because she refused to allow them sleep with her and resisted their attempt to r*pe her.

A group known as, Centre for Basic Rights Protection and Accountability Campaign, released  a statement on Tuesday, June 22.

According to them, the Akwa State Ministry of Justice has come to the rescue of the SS1 student of Community Secondary School, Uyo.

The leadership of Centre for Basic Rights Protection and Accountability Campaign got in touch with the Chairman of Civil Liberties Organization (CLO) in Akwa/Ibom state, comrade Franklyn Isong who informed the International Federation of Women Lawyers (FIDA) in the state, led by Emem Etete Esq.

FIDA in the state brought the issue to the attention of Ministry of Justice and a representative of the Ministry Ruth Nfon Esq came to the community Secondary School, four towns,Uyo.

Information available indicates that the fourteen year old girl will be under the care and custody of the Akwa/Ibom State Government till further notice.

In the meantime, a lawyer with Centre for Basic Rights Protection and Accountability Campaign ,Barrister (Mrs) Jane. O.A. James Esq has condemned the assault on the 14 year old girl allegedly by her step father and step brother for resisting being raped.

Barrister Jane James Esq called on the Ministry of Justice to ensure the perpetrators are brought to book if found culpable.

Reacting to the story, One Odinga took to social media and wrote, “Why is it the picture of the victim instead of then perpetrators? Stigmatization she will face instead of the culprits”

Another user, Chidinma wrote “Ahh! The girl child keeps suffering from all manner of assaults and abuse. The abuse are unending.”

A blossom wrote, “if jungle justice is given to these set of people anytime they are caught. The rest will STOP. Period!!!”

A Bella OJ wrote, “Nawao the female children are not save anymore oooo”

Mercy Aigbe stuns in yellow for her 43rd birthday shoot