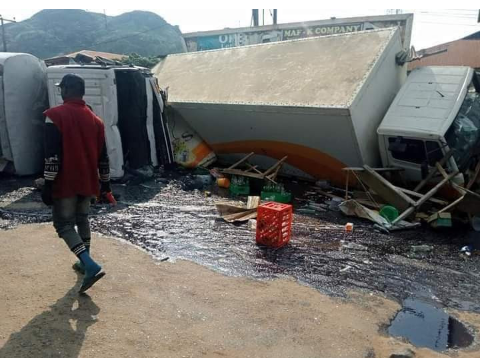 This is sad! A pregnant woman, her two children, and one other person were killed in an accident that involved one tanker, one truck, and six motorcycles at Ikare, Akoko North-East local government in Ondo state on Saturday August 29.

Several persons were also injured in the accident. According to reports, a tanker conveying diesel had a brake failure and crashed into a truck, which eventually crushed the commercial motorcyclists.

The spokesman for the Federal Road Safety Corps (FRSC) in Ondo, Omotola Ogungbawo, confirmed four deaths from the incident. However, eyewitnesses claim the death toll is eight.

The bodies of the deceased persons have been deposited in a mourn.

May their souls rest in peace, Amen…