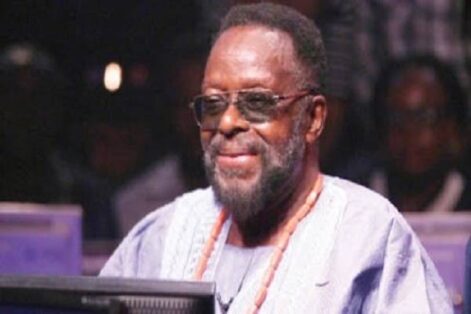 The Nigerian movie industry has been thrown into mourning following the loss of one of its veteran actor; Lari Williams, who died at the age of 81 after a protracted illness.

A statement from the family on Monday confirmed the death of Williams.

The veteran actor died in his hometown, Ikom, Cross-River.

He was the first actor to ever perform on top of Zuma Rock in Abuja FCT, 1,200 feet high, where he performed his late friend, Maman Vatsa’s poem, ‘The bird that sings in the rain.’

Williams was the first president of Actors’ Guild of Nigeria in today’s Nollywood. He was in the cast of Village Headmaster, Nigeria’s first soap opera.

He was in the first home video ever made in Nigeria, titled The Witch Doctor.

As a zealous lover of native, artistic forms, he was the first to bring on stage Egun Lapampa, a dreaded Lagos Island masquerade, as part of his play, Awero.

He was the first artist to be endorsed by two successive Nigerian presidents: Member of the Order of the Federal Republic (MFR) from late President Musa Yar Adua in 2008, and a Lifetime Achievement Award, endorsed by President Goodluck Ebele Jonathan in 2013.