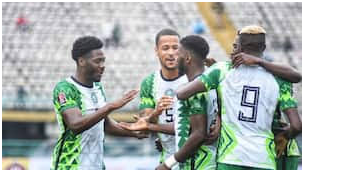 Nigeria, who had a good start to the game, took the lead in the 24th minute through Iheanacho, who scored after a great play from right-winger Alex Iwobi.

As they looked for their second, the Eagles continued to put pressure on their opponent.

The Liberians failed to clear their lines on the stroke of halftime, and Iwobi flicked a header to Iheanacho, who showed wonderful movement to slide the ball beyond the goalie.

Since their debut at the World Cup in the United States in 1994, when they reached the second round, Nigeria has only missed one World Cup — Germany 2006.
Nigeria will play Liberia, Cape Verde, and the Central African Republic in Group C of the 2022 World Cup.

Today’s match versus the Lone Star is the 15th encounter between the two teams, with the Eagles winning 6-1 in a 2013 Africa Cup of Nations qualifier at Calabar.

See when Hushpuppi will be sentenced