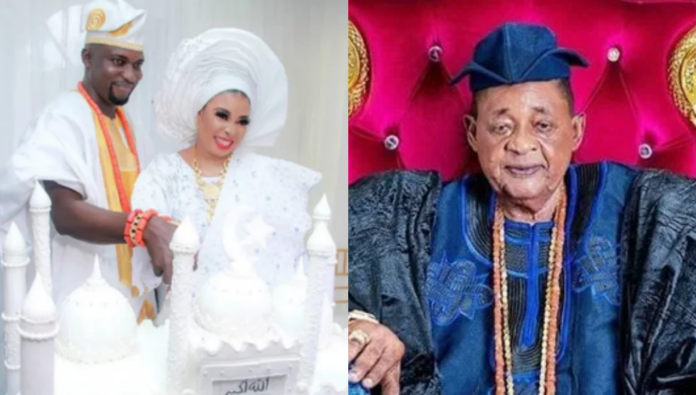 Controversial Yoruba actress,, Lizzy Anjorin allegedly lied about the Alafin of Oyo’s visit to her husband’s house in Lagos.

Charming Magazine recounts that the actress took to her Instagram page to share a video alleging that the Alafin of Oyo and his wife paid her and her husband a visit in Lagos.

According to Lizzy Anjorin who shared the story on her Instagram page, she was enjoying her honeymoon when she suddenly received a call from one of the queens that the royal father is on his way to her place.

The actress said the royal king insisted on seeing her and her hubby before leaving Lagos, hence the visit.

Lizzy revealed that Oba Adeyemi told her husband to pay another bride price with a private jet.

According to new reports by Kemi Filani News, Lizzy allegedly lied about the visit.

Read what they wrote;

“On Saturday, August 1 2020, the Alaafin of Oyo and his entourage departed Oyo for Lagos to pay a surprise birthday visit to Billionaire businessman Habeeb Okunola who is the Chairman of TILT Group of companies. The Alaafin was spotted at about past 10 am on August 2nd arriving the Lekki residence of Habeeb Okunola; where he spent over 2 hours before the arrival of Lizzy Anjorin and her husband who were almost denied entry into the residence of the celebrant.

Pictures and video of the arrival of the Alaafin of Oyo at the residence of Alhaji Habeeb Okunola first broke the internet when popular journalist and publisher of Ovation magazine Chief Dele Momodu first shared it on his Instagram page.

Lizzy Anjorin in her usual manner and style only lied through her Instagram post that the Alaafin visited her to gain clout and cheap popularity.”

Singer Zlatan offers $18K to anyone who finds his missing Cartier...