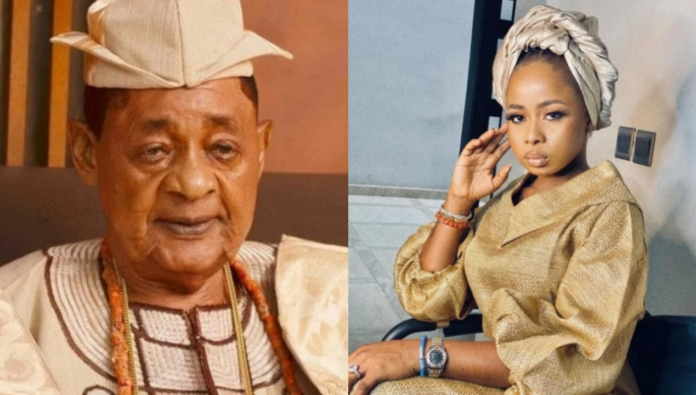 The Alaafin of Oyo, Lamidi Olayiwola Adeyemi III has revealed that the drummers in his palace use their talking drums to notify and warn him anytime a bad person or a traitor visits him. The traditional ruler made this revelation in an interview with Kunle Babatunde, the publisher of Yoruba Tooto newspaper, how he recognizes a traitor in his palace.

He said “It is widely acknowledged​ that this palace is very unique in upholding our culture. When you see my drummers drumming, their drumming are always pregnant of meanings. If a traitor or a bad person visits me, the drummers would use their talking drum to notify and warn me. The person wouldn’t know what they are using their drum to say but I would know. That’s Yoruba culture for you.”

The monarch also promised to ensure the preservation of cultural values in the society.

“As the leader of all Obas in Yoruba land, I will put more efforts in promoting the language, culture and tradition. It is a pity that they are going into extinction. If you have been observing me, you would notice I don’t joke with our mode of dressing, greetings and language. To say we are not united is an understatement and this is so because of the divisive politics our people have been playing without remembering that we are brothers and sisters as a Yoruba”, Alaafin said

Following the report that his Royal Majesty, Oba Lamidi Adeyemi and paramount ruler of Oyo town married a 23-year-old lady, it appears the 81-year-old monarch, a man of many wives has no plans to slow down anything soon.

The respected Yoruba monarch and the Alaafin of Oyo has continued to shock people especially critics who thought the king was no longer in the market where brides are bought with money, power sometimes love.

Many people have wondered and pondered what attracts the young women to an octogenarian. This question probably lies in the minds of many critics and lovers who are strict followers of the monarch’s lifestyle.

While many people have concluded that wealth and affluence are major attractions, it was gathered by Social Circuit that there are other things that make the king likable.

According to palace sources, the monarch is funny, knowledgeable, witty and caring besides placing great value on educating women.

In an interview granted to BBC Yoruba this year, Olori Anoluwapo Adeyemi, one of his young wives admitted she had never regretted marrying the king regardless of what the public say.

She stated: “I feel being the wife of a king of the Yoruba race is God’s grace and it has helped me a lot. It has also helped me to be well behaved. I have learnt a lot from the mothers I met in the house. I have learnt more about the Yoruba tradition too. Alaafin values education, which explains why all his wives are educated. He believes that once a woman is educated, it is of good to her, the kids and society at large.

“I always pray to God to give me his kind of brain. In Yoruba or English langue, he speaks with great wisdom. I am not surprised because he is always in the library. Yes, his face looks hard but if you are close to him, you will know that he is a funny person. When he started making jokes, many people always forget that they are with the king.”

Nigerian Singer Tekno Reveals What He Does Every Morning