Jane Mena, an Instagram dancer, has responded to Tonto Dikeh, rejecting accusations that she asked Tonto Dikeh to preserve her marriage while daring her to disclose the sex recordings.

This comes after Mayor Blessing, a close friend of Tonto’s ex-boyfriend, Prince Kpokpogri, stated in an Instagram post that Jane Mena and her brother had contacted her earlier and asked him to talk to Tonto Dikeh to assist preserve her marriage.

He also stated that he supports Tonto Dikeh on the subject. 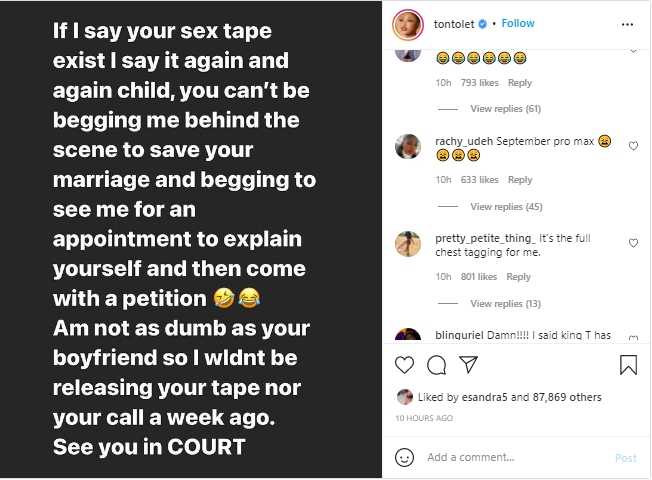 Meanwhile, Tonto insisted on her allegations about a sex tape featuring Jane Mena, a Nigerian dancer, following her contentious split from her political ex-lover, Prince Kpokpogri.

Dikeh and Kpokpogri were embroiled in a violent social media feud when their romance soured.

They had accused one other of infidelity, and a series of pirated audios had surfaced online to support their accusations.

During the subsequent drama, Dikeh claimed she discovered Kpokpogri had taped sex videos of Jane Mena and other married women before she ended their relationship. She also accused the lawmaker of extortion.

Sugar Rush, Citation and Other Nollywood Movies that went Viral in...