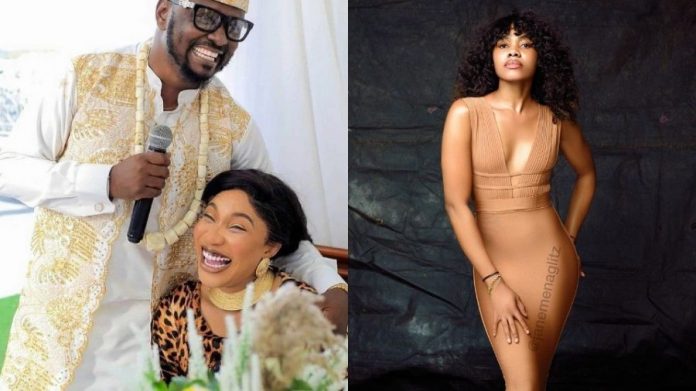 The sex scandal between Tonto Dike’s ex-lover Prince Kpokpogri and popular IG dancer JaneMena has taken dramatic turn as an audio of the former confessing to have had an intimate affair with the dancer, Jane got leaked on social media.

Charming reports that the drama started when controversial Nollywood actress Tonto took to social media to accuse Kpokpogri of having numerous sex tapes of different ladies and JaneMena inclusive. Tonto accused her ex of blackmail and extortion, which he clearly denied.

JaneMena also denied ever sleeping with Kpokpogri and even went as far as suing the thespian for N500million and demanded a public apology.

An audio that recently surfaced online which was leaked by IG blogger says otherwise as a voice recording of Kpokpogri could be heard boasting on how he sexually satisfies the dancer ‘Jane’ from “morning till night”.

In the now-viral audio, Kpokpogri could be heard saying that he and Jane have had all kinds of dirty sex up until 30 styles. He also claimed that Jane confessed to enjoying his sex more than she does her husband whom she has been together with for 9 years (counting from dating till marriage).

As at the time of this report, neither Kpokpogri nor JaneMena had reacted to the leaked audio but we will surely keep you updated as the gist developed.

Listen to the audio below:

Princess set Baba Ijesha up, he doesn’t like women – Actress...