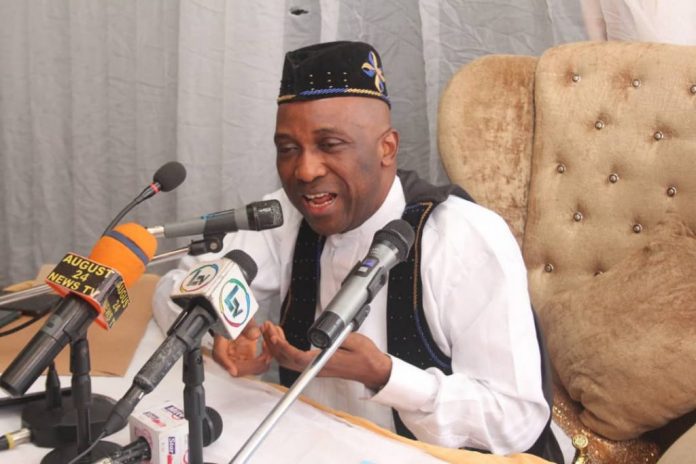 Primate Elijah Ayodele of the INRI Evangelical Spiritual Church issued a new set of warnings for some African countries on Monday, Charmingpro reports.

Primate Ayodele has predicted the removal of the presidents of Tunisia and Sri Lanka in a statement signed by his media aide, Osho Oluwatosin.

He also spoke to members of the Economic Community of West African States (ECOWAS) and the African Union (AU).

He also warned of a sudden intervention in the Central African Republic’s government and a major disaster in Egypt.

In his address to African leaders, Primate Ayodele asked for prayers, predicting sickness and death among African presidents and ECOWAS officials.

Primate Ayodele also stated that the African Union will face security challenges in African countries, and that African nations will begin to experience the unexpected. In order to put things in place, he called for prayers and unity between the AU and ECOWAS.

According to the statement, “AU will face challenges, particularly in terms of security in African countries; there will be food scarcity throughout Africa; and the continent will experience unprecedented climatic change and natural disasters.”

“The African Union and ECOWAS must work together to put things in place; Africa will face problems in terms of economic crisis; I see economic hardship affecting many African nations.” The continent will struggle to stand alone, and I see another country emerging from it. Let us hope that another coup and the death of a former president do not occur before the end of the year.

“Mali will remain in crisis, the Junta will be replaced by a civilian government, and the people will revolt against him.”

“Central African Republic should pray against an unexpected intervention against the government, as I see them in crisis.”

“There will be a major calamity in Egypt, such as an earthquake, that will destroy a lot of things.”

“The presidents of Tunisia and Sri Lanka will be deposed.”

“If Raila Odinga does not take precautions, he will lose the presidential election in Kenya.” He must strategize effectively or Ruto will win at all levels. People will not listen to the current president because he will be criticized. Odinga needs to rethink his strategy before it’s too late, so that the people he trusts don’t abandon him.

“There will be protests against the military government in Sudan, and I believe democracy will return to Sudan.”

“South Sudan must not allow a crisis to develop. Rebels are planning an attack on South Sudan, and they are part of the current government.” The country requires cleansing.

“Chad will see another attack, I see a major terrorist attack, and the president needs to re-arrange his security because terrorists plan to take down some soldiers.”

“Rwanda and the Democratic Republic of the Congo will face a crisis.” Terrorists will target their troops.

“Zimbabwe medical officials will strike, and the government will make a mistake.” I also see oppositions causing problems.

“Let us hope that a current president will not be incapacitated as a result of the illness and death of an African president.”

Buhari initiates plan to eliminate use of kerosene