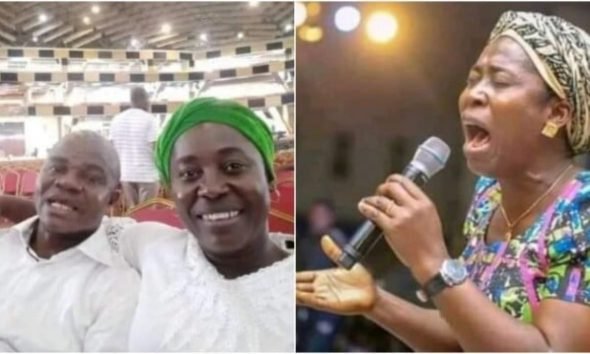 The alleged culpable homicide suit filed in a Federal Capital Territory High Court on Monday against Peter Nwachukwu, husband of the late gospel singer, Osinachi, was withdrawn in order for his lawyers to align themselves to represent him, Charmingpro reports.

When the case before Justice Njideka Nwosu-Iheme came up for hearing, the Prosecution Counsel, Aderonke Imana, informed the court that it was scheduled for hearing and that they were prepared to proceed.

A. Ogbonna also announced his appearance as the nominal complainant’s watching briefs.

Victor Abakpa, the lawyer who represented the defendant during his arraignment, asked the court to adjourn the case until Tuesday because another lawyer from a different chamber had just informed him that he would be taking over the case.

He also stated that he was served with additional proof of evidence in court just before the day’s proceedings began.

I.A Aliyu, for his part, informed the court that the defendant briefed him on June 18 to take over the case.

As a result, the court rescheduled the case for 11 a.m. in order for counsel to align themselves and appear properly before it.

According to the News Agency of Nigeria (NAN), family members of the deceased singer, Osinachi, were in court on Monday.

The case, which had been adjourned until June 16, could not be continued due to the judge’s absence.

On June 3, the defendant was arraigned and remanded in Kuje Correctional Centre after pleading not guilty to the alleged homicide charge brought against him by the Attorney-General of the Federation.

Nwachukwu was thus remanded in custody pending the hearing and determination of the 23-count charge of domestic violence and homicide filed against him.

He was arrested by Nigeria Police after his wife died on April 8 as a result of widespread allegations by their children, family, and colleagues that he battered her and caused her death.

The alleged crime committed by Nwachukwu violates Sections 104 and 379 of the Administration of Criminal Justice Act (ACJA) 2015, Section 221 of the Penal Code, and the Violence Against Persons Prohibition Act (VAPP) 2015.

“That you Peter Nwachukwu, 56, male, did commit an offence to with: culpable homicide punishable with death on the 8th of April at Aco Estate, opposite Police Station, Lugbe, Abuja, FCT, within the jurisdiction of this court, in that you caused the death of Osinachi.”

“This was caused by your various acts of violence and aggravated assault with the knowledge that her death was a likely result of your actions.”

“Particulars of offence: That you, Peter Nwachukwu, male, committed an offence to wit: emotional, verbal, and psychological abuse on Mrs Osinachi Nwachukwu sometime between Nov. 14, 2009, and April 2022 at Aco Estate, opposite Police Station, Lugbe, Abuja, FCT, within the jurisdiction of this court” (deceased).

“This was caused by humiliating her and saying things to her like ‘you are smelling,’ ‘you are mad,’ in front of her music crew members.”

The offense statement bordered on emotional, verbal, and psychological abuse, which is prohibited by Section 14(1) of the Violence Against Persons (Prohibition) Act, 2015 and punishable by the same section of the Act.

The late Osinachi was well-known for her hit song “Ekwueme.”