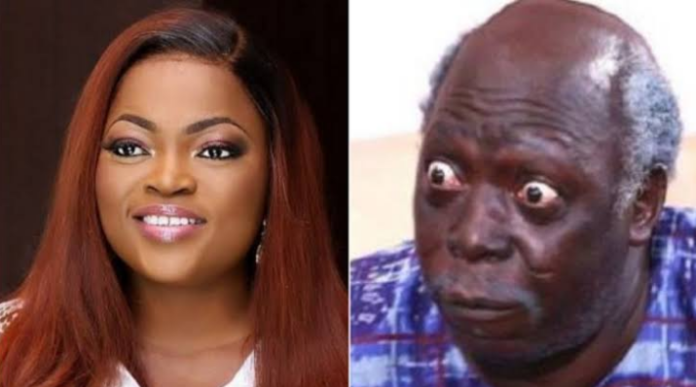 Weeks after talented Nollywood actress, Funke Akindele was alleged to have gifted a veteran actor, Ajirebi also known as Pa James a new house, following the flood that sent him away from his hold apartment, fast rising actor, Tonade Taiwo Emmanuel, is said to be planning to feature the two great actors in his next movie Productions.

Tonade, who is the current president of Rotary club of Surulere, Western Avenue, District 9110, we gathered is planning to return into Nollywood with two fantastic movies and he has decided to feature Funke Akindele and Pa James in one of the movies which will take place in September 2020.

We further learnt that the movie will also parade a whole lot of super stars like Taiwo Hassan Ogogo, Odunlade Ademola, Muyiwa Ademola, Lateef Adedimeji, Mobimpe, Bukunmi Oluwasina and many others.

If you must know, Tonade is a versatile actor and a travel consultant. Though, he is not new in the show business but as the saying goes, a patient dog eats the fattest bone, which is what aptly illustrates the success story of the multi-talented actor. He is one of the hottest and new actors in the Yoruba movie industry at the moment after featuring and produced a lot of blockbuster flicks.

Emmanuel was born from the popular family of Tonade in Ipetu, Ogun state. He attended Saint Agnes Primary School, Yaba and later joined Western College, Yaba before he gained admission to Moshood Abiola Polytechnic in 2010 to study marketing for his National and Higher National Diploma Certificates. He has another degree at the University of Lagos.(Pub. Admin.)Also has a Diploma in Ticketing and a travel agent with Landover Travels School Lagos. Currently under going an IATA Foundation Course now.

Acting for him started in 2002 when he joined a movie caucus headed by Elder Samuel Showunmi and he got his freedom from him in 2010. Having not rest on his oars, he started producing his own movies in 2013. He has produced so many films today. He’s a registered member of Theatre Arts and Motion Pictures Association of Nigeria.(TAMPAN) Current Social Secretary Mainland Local Government. Lagos State.

God has neglected me – BBNaija’s Ifu Ennada Cries out, Daddy...