Ernest Lee Johnson, who was executed on death row on Wednesday night, October 5, wrote a chilling farewell statement before his execution.

In February 1994, he was sentenced to death for murdering three Missouri corner store employees with a hammer during a robbery. 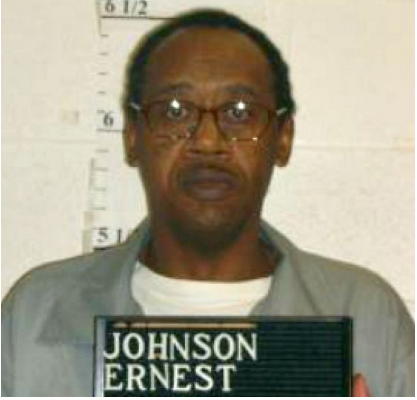 Johnson returned home covered in blood after telling his crack dealer he was going to rob the store. Mary Bratcher, 46, Fred Jones, 58, and Mabel Scruggs, 57, were his victims.

In the hours leading up to his death, the convict penned a short letter in which he told his family he loved them and told them “I know where I’m going”.

He added that he is “going to heaven” because he had asked God to forgive him.

The statement, released by local news journalist Kathryn Merck on Twitter, also sees him thank his lawyer, who he said made him “feel love as if I was family to them”.

His final statement reads: “I am sorry and have remorse for what I do. I want to say that I love my family and friends, I am thankful of all that my lawyer has done for me.

“They made me feel love as if I was family to them, I love them all, for all the people that has prayed for me I thank them from the bottom of my. I love the Lord with all my heart and soul.

“If I am executed I know where I am going to heaven. Because I ask him to forgive me God everyone. Whit respected Ernest L Johnson (sic).” 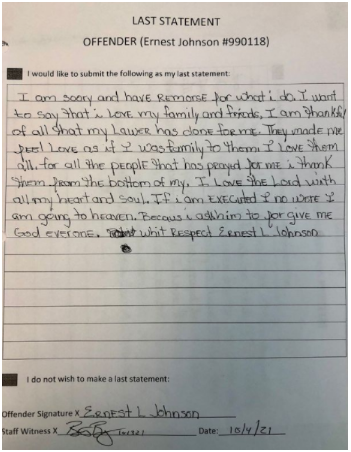 Johnson’s case had attracted huge controversy over the years, as supporters and experts said he should be excluded from the death penalty because of his intellectual difficulties.

Pope Francis even begged for clemency on his behalf.

A spokesman for the Pope said that he wished “to place before you the simple fact of Mr Johnson’s humanity and the sacredness of all human life”.

However, Johnson’s sentence was upheld by the US Supreme Court on Monday, October 4, after a last-minute appeal for a stay of execution.