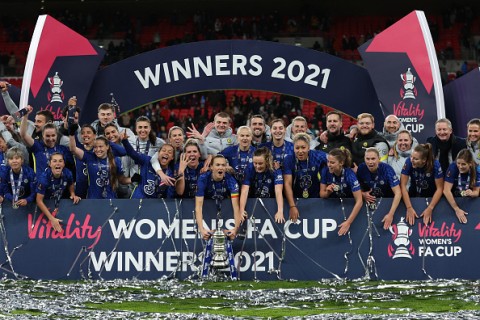 This season, Chelsea won the Women’s FA Cup, defeating Arsenal 3-0 in the final at Wembley Stadium on Sunday.

Emma Hayes’ squad dominated the female Gunners from the outset, with Fran Kirby putting the Blues up after only three minutes.

Sam Kerr doubled Chelsea’s lead after the interval and completed the game with a brilliant chip with 15 minutes remaining.

The Blues put forth a terrific effort in their sixth FA Cup final against an Arsenal club.

The Blues also accomplished a domestic triple when the competition was postponed due to a coronavirus epidemic previous season.

The Blues and the Gunners are currently in a serious battle in the race for the Women’s Super League.

Following Chelsea’s emphatic win, double goalscorer Kerr said: “I think we deserved it – I think we played really well, as we have done in the past few weeks.”