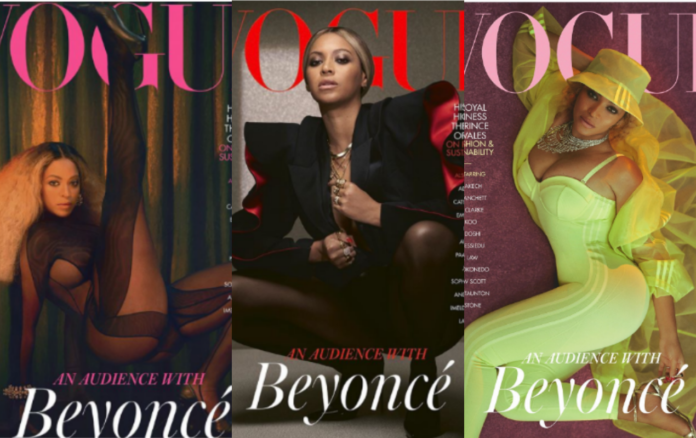 The Mother of three looked exquisite, classy, beautiful and flawless like always.

The pictures were taken by Kennedi Carter, 21, from North Carolina, making him the youngest person to shoot a British Vogue cover in the magazine’s 104-year history.

Speaking over Zoom, the musician, fashion designer and producer said she felt “absolutely changed” by the events of 2020.

“I have learnt that my voice is clearer when I am still. I truly cherish this time with my family, and my new goal is to slow down and shed stressful things from my life.”

She continued: “I came into the music industry at 15 years old and grew up with the world watching, and I have put out projects non-stop.

“I released Lemonade during the Formation world tour, gave birth to twins, performed at Coachella, directed Homecoming, went on another world tour with Jay, then [directed film] Black Is King, all back to back. It’s been heavy and hectic. I’ve spent a lot of time focusing on building my legacy and representing my culture the best way I know how. Now, I’ve decided to give myself permission to focus on my joy.”