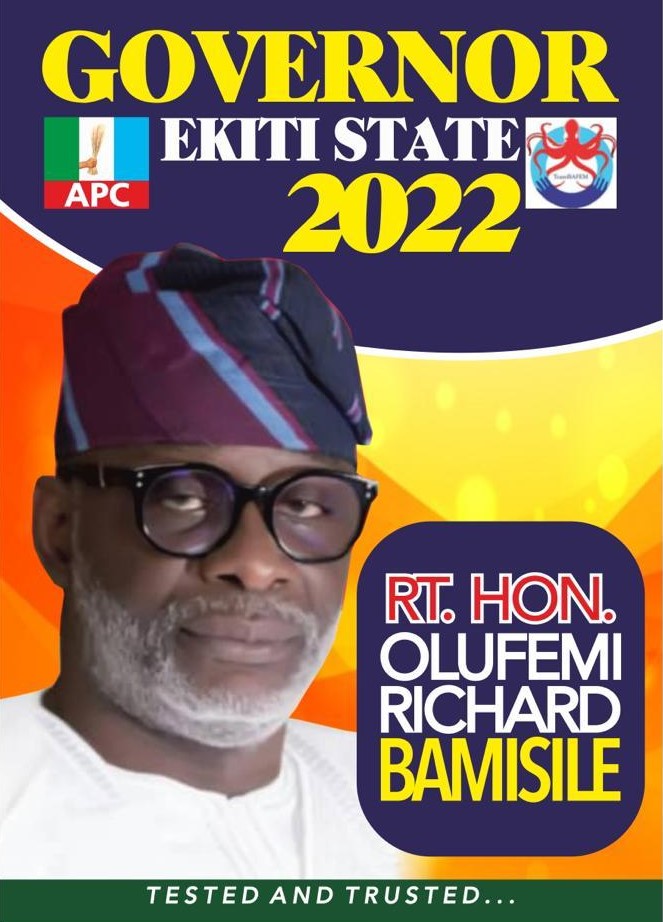 A group of Ekiti State Indigenes in the Diaspora who are interested in good Governance, have thrown their weight and support behind Hon. Richard Olufemi Bamisile (aka BAFEM), the current APC member of the Federal House of Representatives (Ekiti South II Constituency).  The group is rooting for Hon. Bamisile, as the most competent aspirant across board to take over the State from the current incumbent (Dr. Kayode Fayemi), and lead Ekiti State to greater heights.

The Group (Ekiti Diaspora for BAFEM) which consists of Professionals cutting across the State Geo-Political Zones, made this statement at the end of their meeting held in London, on 4th January 2022.

The Chairman and Convenor of the Group, Mr. Adetokunbo Layokun, in a press release, said the group came to this decision based on the following facts:

Firstly, Ekiti South Senatorial Zone has not produced a Governor since the Creation of the State.

Since the creation of  Ekiti State 25 years ago, on 1st of October 1996, the South Senatorial Zone of the state has not produced a Governor, despite having competent Indigenes.  Meanwhile, the North and Central Zones, have produced two Governors each: Governors Adebayo and Oni – from the North, and Governors Fayose and Fayemi – from the Central respectively, to fill the coveted seat. 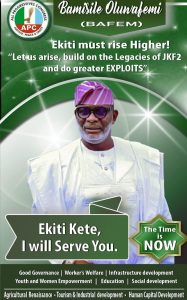 The Marginalisation of the South Senatorial Zone they said was contrary to the Unwritten Zoning Agreement of the APC Founding Fathers, which has been restated by Governor El Rufai (Kaduna State) and Senator Chris Ngige (APC Founding Member and Current Minister for Labour and Employment), which according to both were adhered to by the APC (Ruling Party) at ALL Levels (Federal/State/Local Government) of Governance by the Party.

They said this is the reason why there is a clamour by faithful Party Members that the next President to succeed current President Buhari (Northerner) must be a Southerner; hence,  for Equity, Justice and Fair-Play, it is now time for the State’s South Senatorial Zone to produce the next Governor in the coming Ekiti Gubernatorial Election 2022.

Secondly, based on the issue of Competence, the Group agrees that Hon. Richard Olufemi Bamisile is the most competent Candidate of ALL the Aspirants vying for the coveted seat under the Platform of the APC.

According to Mr. Adetokunbo Layokun, Hon. Bamisile is a grassroot politician who is familiar with the Political Terrain of the state, having served at various levels of Government; among which are:

Fourthly, with reference to Youth and Women Development, Mr. Adetokunbo Layokun stated that the Group commended Hon. Bamisile, for his tireless and unrelenting love for the Youth and Women of Ekiti State.

The Group lauded Hon. Bamisile for his Sponsorship of the BAFEM Cup, a Football Competition organised by the Ekiti State Football Association to develop the footballing skills of Ekiti Youths, discover new talents, and determine the State Football Champion.

They also praised BAFEM for the provision of various Incentives to women in the state (Sewing Machines, Generators, Grinding Machines, Cooking Gases etc) to help them set up small cottage businesses to sustain their families.

Touching on Social Welfare Packages, Mr Layokun stated that the Group, ‘Ekiti in Diaspora for BAFEM’, are in full support of  Hon. Femi Bamisile because of his genuine feeling of empathy and compassion, for the less privileged and the needy.

They pointed to the following Welfare Projects, amongst others:

Concluding the press statement, the Chairman of ‘Ekiti in Diaspora for BAFEM’, Mr. Layokun, further appealed to the State Governor of Ekiti State, Dr Kayode Fayemi, to ‘seize this opportunity to have his Name written out in Gold, by ensuring that the most competent candidate among the aspirants (in this case, Hon. Femi Bamisile) gets the APC Gubernatorial Ticket; so that the Party’s success at the June 2022 Poll is assured.’