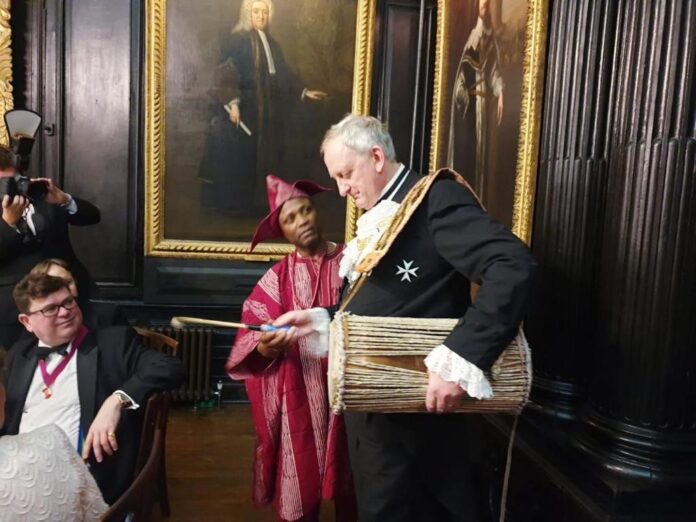 Nigerian Cultural Icon, Ayan De First, has been awarded Liveryman of the City of London, in recognition of his exceptional contribution to the wider community and services rendered within and across the Livery companies.

The Prestigious Award is a unique way of showing the City Livery Club’s appreciation of the contribution made by those in the Livery movement, who are doing outstanding work to advance the wider aims of the Livery – Ayan De First being one of such contributors.

Based here in the U.K., Ayan is a populous talking drummer: performing live at African and Multicultural functions in and around UK & Europe. He has appeared in not one – but all British national newspapers and across all British Broadcast television stations.Armed with his Talking Drums, Ayan De First also manages to weave African culture and music into the educational sphere: running practical instrumental drumming lessons to students.

Last year, Ayan performed for the second time at the City of London’s Annual Banquet, where he won the crowd over with his musical display. It was here, William Russell, The Mayor of London, was happy to award Ayan De First Liveryman of the City.
Today, now a Liveryman Ayan De First has been fully clothed with livery garment placed on him in the Apothecaries Hall & Court of The Lord Mayor of London. Just like every other Liveryman, Ayan is eligible to wear his medal, vote during the annual election of The Lord Mayor of London, the sheriffs and numerous other City civic offices – including Ale Conners and Bridge Masters.

This is what Ayan De First had to say:

“This is not only a great honour and privilege for me as Diaspora and Pan African, but recognition of the immense contribution of African culture to the economic life of the City of London. I hope this honour will spur on a lot of our young to take up the promotion of Nigerian and African Culture.”
“Given the current climate in which we are, whereby there is a growing appreciation of black culture and the need for more integration, culture is something we need to look at as a means of bridging the divide between communities. Every Society has its own culture and it would help if we all took it upon ourselves to learn about other cultures as a means of appreciating one another.”

Nigerian Lady Kills Herself After Accusing Her Cleric Dad of Sexual...

Big ups to men that are not ashamed of dating chubby...