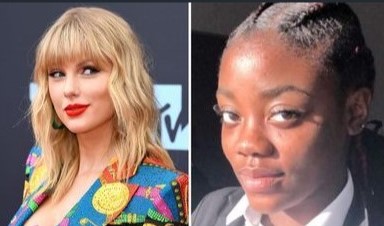 A future mathematician, who didn’t have means to pay for her university tuition fees in the UK, has found favour from American singer Taylor Swift, who donated £23,000 to her appeal fund.

Taylor Swift made her contribution via a Go Fund Me page for the student, Vitoria Mario, which explains she may be unable to take up her admission offer at the University of Warwick, because she is not eligible for grants or maintenance loans having only moved to Britain from Portugal four years ago.

The 18-year-old Ms Mario was graded two A*s and an A in her A-levels.

She lost her father some time ago, and with her mother living in Portugal, she lives with family members in Tottenham, North London.  This arrangement she describes as “a challenge, but a sacrifice worth being made in my family’s eyes”.

Vitoria Mario explained  her family was not in the position to support her with funds needed to purchase essentials like a laptop and textbooks, and to settle her accommodation and general living costs.

Ms Mario estimated she would need £24,000 for accommodation, £3,000 for equipment and £13,000 for general living costs including food, transport, gas and electricity.

Alongside the donation for £23,373, Swift wrote: “Vitoria, I came across your story online and am so inspired by your drive and dedication to turning your dreams into reality.

“I want to gift you the rest of your goal amount. Good luck with everything you do! Love, Taylor.”

In her words, Vitoria said, “Though my story is not unique, my dream of becoming a mathematician is not only a chance at social mobility for my family and I, but to inspire people who have been in similar positions to aspire to be the best version of themselves and strive for their dreams despite gender/racial inequality, immigration issues and financial barriers”.

Meet 6 Popular Nigerian Musicians who had their Stage Names Customised...

Remembering the Christian Lady who died Smiling. Here’s what Happened …