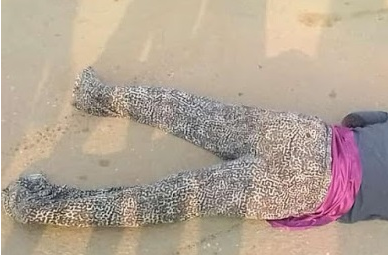 According to reports, the victim’s heart and other vital organs were ripped out of her body.

It was gathered that the late Nwafor Blessing and her mother, a petty trader, were members of the Pastor’s Church located along Board road, Boji Boji, in Agbor.

The Charming Magazine gathered that the corpse of the deceased were a gory site to behold as the corpse of the little girl was dumped close to the Central Hospital, Agbor, from where the police removed it on Friday.

According to a community source, the pastor had taken a decision to ‘help’ the girl after an evening service by calling for a motorcycle to convey her home.

“After waiting endlessly without seeing the girl at home, the mother went to the man of God to ask about her child. The cleric did not deny getting a commercial motorcycle to convey the girl home. He pacified the troubled woman that the child was safe,” the source who would not want his name in print said.

However, the motorcyclist who was later apprehended by the police, during interrogation implicated the pastor of being in the know of what happened.

The suspects later led detectives to the spot where the girl’s mutilated body was dumped behind the state School of Nursing by Central Hospital.

The state acting Police Public Relations Officer Bright Edafe, said, “We have arrested the pastor of the church and one other suspect who is a member of the church.

Nigerian football league can catch up with the best around the...