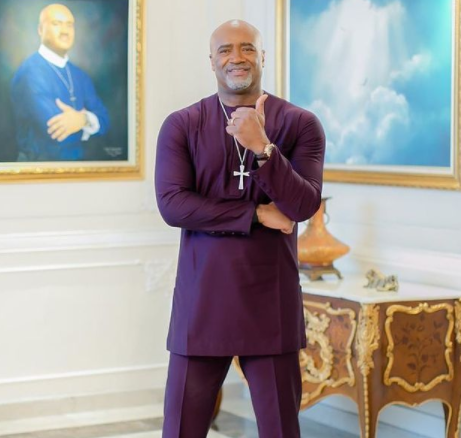 Pastor Paul Adefarasin has taken to social media to celebrate his wife, Ifeanyi Adefarasin as they mark their 26th wedding anniversary.

Pouring encomium on her, he praised her with a partly adopted eulogy from ‘The Amazing grace’.

“Through many dangers, toils and snares, we have already come”

“His promises are good to us, His words our hopes secured.”

Thank you for being the gracious heart that you are,

…the consummate mother to our family and fold.

Thank you for being the firm and steadfast friend through thick and thin;

…the unflinching lover of my soul and the oft wind in my sails,

…still waters and calming seas beside which I have reposed my laboured limbs and where my wearied soul found rest when each day & its duty was done.

*partly adapted from The Amazing Grace”*

Paul Adefarasin and Ifeanyi got married in 1995. They are blessed with 3 lovely kids.

Paul Adeolu Adefarasin is a Christian Minister, Bible Teacher and Televangelist. He is the Prelate and Metropolitan Senior Pastor of the House on the Rock churches headquartered in Lagos, with branches around the world.

2020 Best Nigerian Movies that made it to Netflix