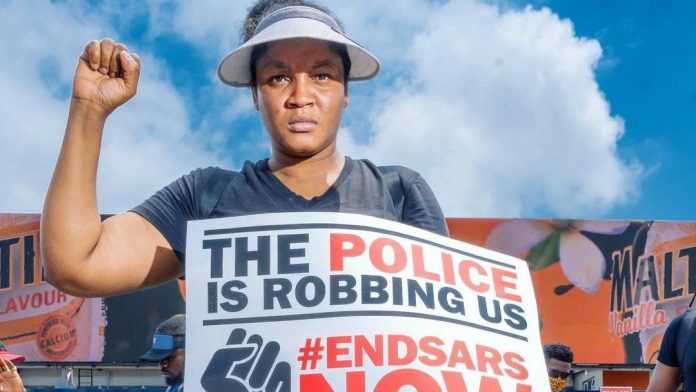 Actress Omotola Jalade-Ekeinde has been criticized on social media for her #EndSARS protest post from October 2020.

“Let their people speak out whether anybody died during the Lekki Toll Assault, and if there were no fatalities, then enough with the sensationalization since it does not detract from the crime that happened,” the actress tweeted. Why were peaceful demonstrators killed? “Who?” you might wonder.

Nigerians reacted angrily to the veteran’s remark on Twitter, and she later apologized days later.

The message reappeared on social media on Tuesday, November 2021, after the Lagos State judicial panel on reparation for victims of police brutality stated that nine people were murdered at the Lekki toll gate when troops attacked the area to disrupt #EndSARS protestors.

Several Nigerians responded by criticizing Omotola once more on Twitter, while others advocated for a boycott of her film Alter Ego, which is presently trending on Netflix.

@d_queen_v tweeted, “Has Omotola issued an apology? Because asking for bodies or the families of people who died was actually quite insensitive.”

@BarcaPrincipal tweeted, “Sheybi Omotola Jolade said there was no killing at LTG last year during #EndSARS, If they had killed everyone in Nigeria 🇳🇬, Who’ll be watching the “Alter Ego” that she’s bringing to Netflix??? She’ll be alright when after 1 month, na only 100 people watch am.”

@tachartcode tweeted, “Coming from a great Nigeria 🇳🇬 influencer a whole you Omotola sure am not surprise when d bad government made you their puppet sure u have to be in support of their activities without questioning their characters shame fah.”

“Good morning Omotola Jalade @Realomosexy, these are d names of victims of Lekki massacre during #EndSARS. I recall you’re one of those that said it’s all a lie, that nobody died. People lost their lives, people got injured and some got missing,” @Usmanashafe tweeted.

“Boycott Omotola’s new project Alter-ego. Her act was intentional. Her purpose was to discredit what we all knew was true,” @Nwariocha tweeted.

@yettieShuga tweeted, “People like Omotola Jolade were asking where are the bodies.. insinuating that Dj switch was insane abi what? We must not forget o.”

@kittyprince tweeted,” So the Lagos panel has finally reported that the Lekki incident was a massacre. Honestly what the Government did was a democide and God will definitely punish the Nigeria Army and those who gave them the order and anyone who doubted Dj switch …. Omotola is a disgrace.”

“I still remembered Omotola trying to use English to gaslight #EndSARS massacre that happened at Lekki and other parts of Nigeria. Well, what “IF” you asked for the slayed heroes singing the National Anthem? Always remember to call out their names,” @commonvaluez tweeted.