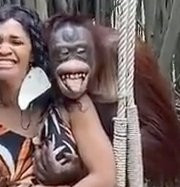 An orangutan fondled and kissed a tourist during a zoo visit, and the incident was captured on video, Charmingpro reports.

READ ALSO: Married men reject motion calling for them to stop running errands for their wives

The woman was visiting Safari World in Bangkok last week when the excited animal touched her breasts and even kissed her on the cheek while she was posing for a photo.

The ape grins broadly as people photograph and film the interaction.

The woman laughed as the orangutan kissed her cheek again.

View the video below.

The best video you'll see on the internet today 😅😅

The makeup transformation of this 75 years old woman has left...