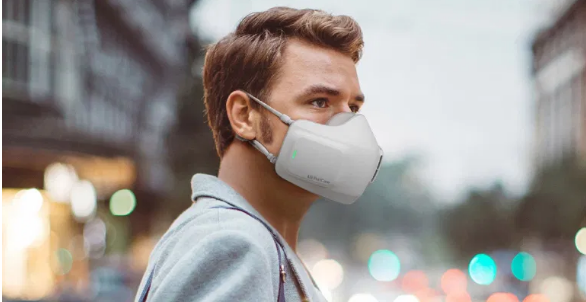 Korean Tech giant, LG Electronics has unveiled a new face mask that includes built-in fans and filters to create what the company is calling a “wearable air purifier”.

This innovation which is powered by battery includes two H13 HEPA filters, similar to those used in home air purifying products, as well as dual fans and a patented respiratory sensor to adjust the fan speed in line with the wearer’s breathing speed.

Called the PuriCare Wearable Air Purifier, LG says the device allows the user to breathe clean air both indoors and outside. The battery can last up to eight hours on a single charge, and the device comes with a case that houses UV-LED lights that kill germs between uses, while the case can also send alerts to an LG app to notify the user when the air filters need to be replaced. LG said the mask could help solve the problem of homemade masks being of inconsistent quality and disposable masks being in short supply.

The company is to officially reveal the mask during the IFA technology trade show in Berlin next week, which is going ahead both virtually and in a much-reduced capacity in person. The company has not yet confirmed the price or release date for the mask.

Photos of boarding school student killed by gunmen in Plateau