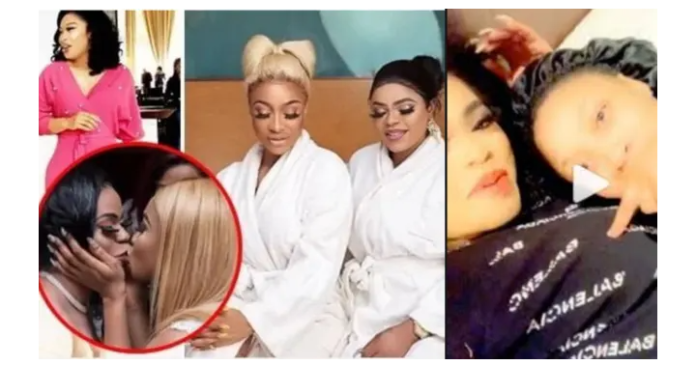 Before now, the bond between the two controversial “Instagram drama queens” was so strong that light skinned pretty looking Bobrisky could take a bullet for Actress Tonto Dikeh, and the Pretty Movie Star, Tonto Dikeh could spend her last dime on him.

Charming recalls that the duo was once caught kissing each other at a function. Actress Tonto Diken was also seen fondling bobrisky’s “breasts” in a viral video.

According to some trusted reports, The Movie Star, Tonto Dikeh has decided to keep things low and take them slowly with Bobrisky. A source revealed that Tonto Dikeh is distancing herself from Bob because of her future political ambition.

“Tonto Dikeh is shying away from Bobrisky’s friendship because of her future political ambition,” The source said.

“After their Dubai trip, where Tonto was allegedly arrested, she complained about Bobrisky being in Everyone’s business one business. Tonto also advised him to desist from that. Ever since then, their friendship went sour”, The source added.

It was earlier reported that Actress Tonto Dikeh revealed her plans to become a Nigerian politician.

The fresh and healthy divorced mother of one was asked if she has plans to venture into politics, and she replied; “You are looking at a future senator.”