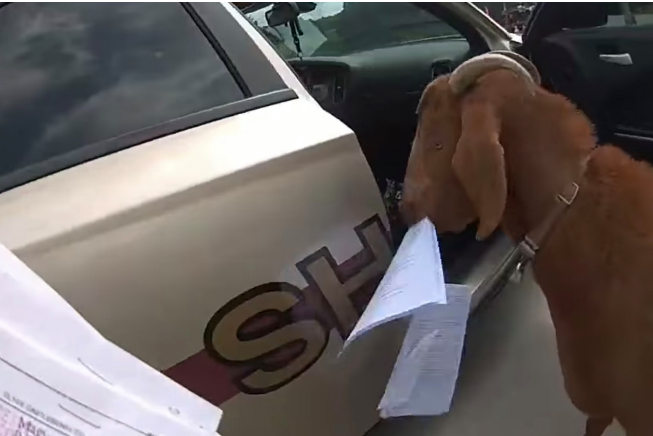 There was drama in Georgia after a wandering goat invaded a police officer’s car, chewed up all her paper work and head butted her.

The Douglas County Sheriff’s Office shared the video of the encounter on Facebook. According to the post, an unidentified police officer was serving civil papers at a residence when the incident happened.

She had left the car door open. The Sheriff’s office explained that she made a habit of keeping the door ajar because she’s routinely chased away from homes by angry dogs and occasionally requires speedy access to her cruiser.

“Due to the number of houses [the deputy] visits daily, she routinely leaves her vehicle’s door open because she has had to [retreat] on a number of occasions from vicious dogs,” the sheriff’s office explained in the caption that accompanied the video.

“Never once did she expect or even consider what was about to happen this day!”

While the officer was still knocking on the house’s door, she can be heard saying, “I hope that goat don’t get in my car.” Seconds after, she laughed and said, “Oh [expletive], he’s eating the paper.”

She dashed for the car, and repeatedly nudged the goat from the front seat while trying to rescue the documents from its mouth. The goat spilt a drink in the process.

When the animal finally exited the vehicle, it knocked her to the ground with its head.

The sheriff’s office said that the officer wasn’t injured.

“[Although] she was knocked to the ground she was not physically harmed in the incident,” the sheriff’s office said. “At the end of the day we all got a little laugh out of it and we hope you do as well!”