The University College Hospital (UCH) in Ibadan, Oyo State, has mandated that each patient who visits the hospital pay N1,000 per day for electricity supply, Charmingpro reports.

The hospital insisted that the new levy is required to cushion the impact of an increase in the price of electricity tariffs and diesel used to power the hospital’s generating plants.

An internal memo from the Federal Government-controlled hospital made these declarations.

According to the memo obtained by newsmen on Monday, the decision was motivated by the high cost of electricity and the rising price of diesel.

According to our source, Wole Oyeyemi, UCH administrator, signed the memo titled “Approval For The Recommendation To Add Utility Fee To The Service Fee Charged To Patients In The Hospital.”

The memo was addressed to the hospital’s Director/Head of Finance and Accounts.

It stated that all patients who use the tertiary healthcare facility must pay the N1,000 daily fee.

The hospital has been experiencing power outages for some time, according to the memo.

It went on to say that the hospital is dealing with issues such as high electricity tariffs and diesel price inflation.

The memo then revealed that this prompted the hospital to make the decision to assign the patients the responsibility of paying the money on a daily basis.

“To that end, I write to convey management’s approval for every patient receiving care in this hospital to be required to pay a daily utility fee of N1,000.”

“Following the hospital’s recurring power outages, high electricity tariffs, and diesel price inflation, which has hampered stable power supply, management has decided to consider measures that can help to facilitate flawless service delivery in the hospital.”

“To that end, I write to convey management’s approval for the mandatory payment of N1,000.00 (one thousand naira only) daily utility fee by every patient accessing care in this hospital,” it said.

“You are kindly requested to implement the approval immediately.” 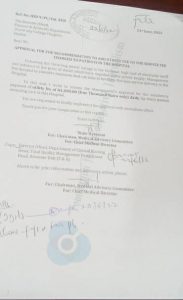