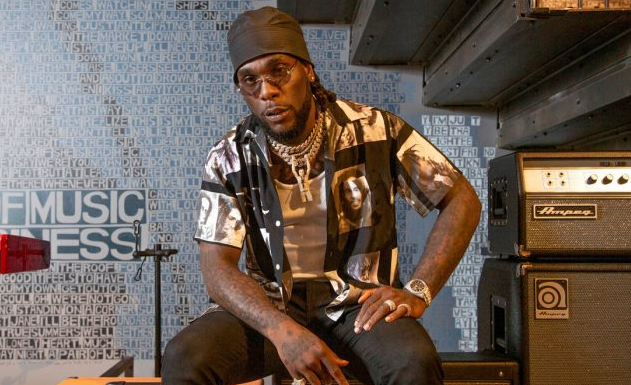 Nigerian music star, Burna Boy who recently dropped his latest album, “Twice as Tall”, has made his highest-ever career appearance on the Rolling Stone Top 500 Artists chart this week, landing at Number 128.

The Rolling Stone Artists 500 chart ranks the most-streamed artists of the week in the United States, taking into account audio streams across an artist’s entire catalog during the tracking period.

According to Elias Leight of Rolling Stone, Burna Boy pulled in a total of 14.8 million streams between August 14th and August 20th in the U.S.

The singer’s numbers for Twice as Tall show steady growth since last year’s Grammy-nominated African Giant, which has earned more than 100,000 album-equivalent units in the 13 months since its release.

Twice as Tall debuted at Number 54 on the Top 200 Albums Chart, amassing 11.4 million audio streams Stateside, an increase of around 50 percent relative to African Giant‘s opening week of 8.5 million.

During Twice as Tall‘s first week, “Monsters You Made,” a bracing track featuring Coldplay’s Chris Martin, proved to be the album’s most popular song, earning more than a million audio streams in the U.S.

It was followed by “Way Too Big,” a syncopated missile co-written by the super-producer Timbaland and the longtime Kanye West collaborator Mike Dean, and “Level Up (Twice as Tall),” the blunt album-opener, which each earned more than 850,000 streams.

These numbers reflect Burna Boy’s growing profile, which has expanded in the U.S. through a combination of relentless touring (pre-pandemic) and savvy collaborations with acts like Future, YG, and Naughty by Nature, among others.

“One thing that’s constant [in my career] is growth,” Burna Boy told Rolling Stone in 2019. “It’s not an up and down thing. I climbed every step. I don’t skip steps — I’m too heavy to skip steps.”