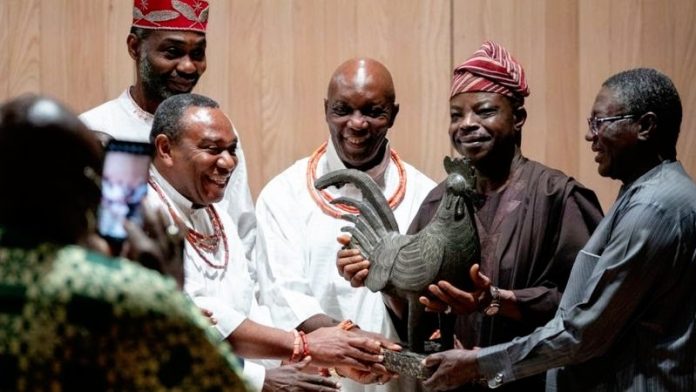 Buhari made the statement on Monday in response to the monarch, HRH Oba Ewuare II, receiving Okukur and the Head of Oba of Benin bronzes from the United Kingdom.

When British forces attacked the ancient Benin Kingdom in 1897, they took the items with them.

After 125 years, they were repatriated from the Universities of Cambridge and Aberdeen.

The President praised the schools and the UK government for providing Nigeria with the necessary Export Permits at no cost.

”These are unprecedented moves worth emulating by others”, the President said while encouraging Britain to return others.

In collaboration with royal families and kingdoms, he promised that the arts would be restored to museums and other facilities.

Buhari also praised Germany for returning 1,130 Benin bronzes to the country this year.

The Nigerian leader praised the work of Sarafa Ishola, the High Commissioner to the United Kingdom, and the National Commission for Museums and Monuments (NCMM).

Pastor curses church members for not contributing money for her birthday