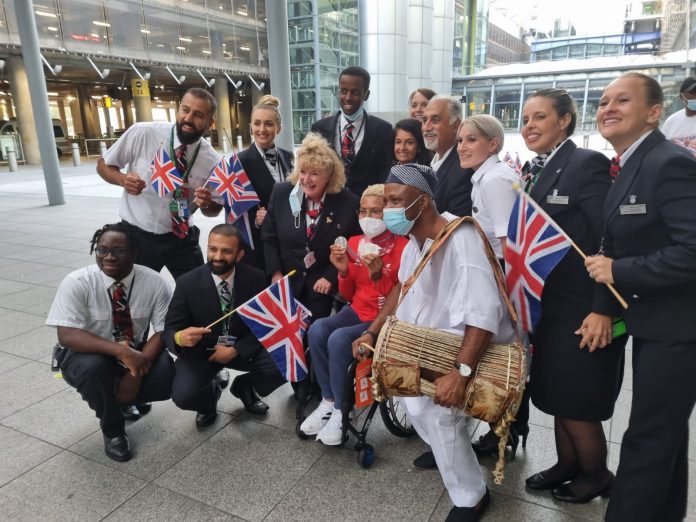 A British Nigerian, Kare Adenegan, has won 2 silver medals for Great Britain in both the Women’s 100m T34·Athletics and Women’s 800m T34·Athletics, at the just concluded Tokyo 2020 Paralympic Games held in Japan.

On her return to the United Kingdom with other Paralympic stars, Kare was warmly welcome by her family and well-wishers at the London Heathrow Airport. She was also entertained with a special cultural performance by Africa’s finest cultural talking drummer, Ayan De First-Mr Culture. This performance was Mr Culture’s 7th Show at London Heathrow Airport.

Prior to this warm welcome performance for Kare Adenegan, Ayan De First-Mr Culture had performed at London Heathrow Airport for the Black History Celebration. He also had performed for dignitaries and top celebrities like Abubakar, Sir Richard Branson, Prominent King of Ile Oluji in Yoruba land, Nollywood Actress Funke Akindele, and the Ooni of Ife.

20 year-old Karé Adenegan, who is currently a History Student at Warwick University, was born with Cerebal Palsy, a condition which impairs her lower limbs and mobility.

Despite challenges, Nigeria still one of the most hospitable countries to...

See photos of Regina Daniels and her aged husband’s son

‘We must borrow because Nigeria is POOR’ – Senate President cries...