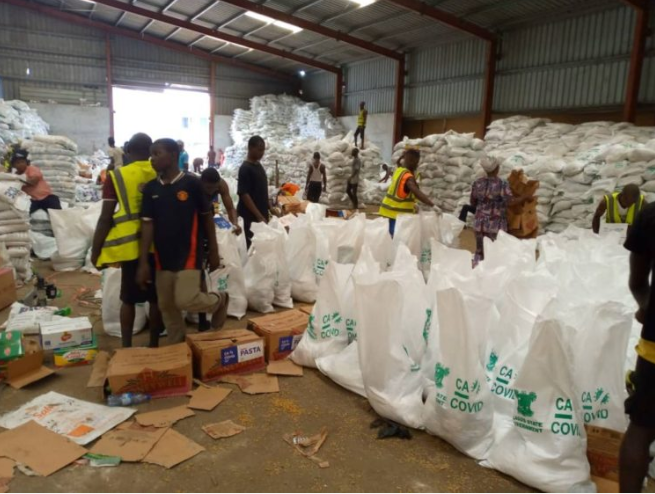 Reports today Friday Evening, 23rd October, 2020, states saying Group of Hoodlums succesfully stormed an uncompleted building owned by the Cross River State government and carted away bags of rice, beans, cartons of noodles and other food items which were part of the COVID-19 palliative, believed to be transferred from the warehouse to the uncompleted building for reasons best known to them.

The uncompleted building, which was housing the proposed West African Fabrication Academy, was where Governor Ben Ayade last April held a symbolic flag-off exercise for distribution of COVID-19 palliatives.

It was also reported, that Earlier today Friday, 23rd October, 2020, hoodlums had also stormed Calabar South Local Government Secretariat where office of the local government chairman was vandalised. they political block in the secretariat premises looting items and destroying structures. This incident was confirmed by the Chairman, Hon Esther Bassey.

Video of the looting on social media also showed some of Nigeria youths shouting: “This is wickedness. This is what they were supposed to give us, they did not. Somebody kept it in uncompleted building. Let security come, we don’t care.”

The hoodlums burt tyres in the premises, also destroying windows and other property. Staff and limited security that were in the secretariat had to leave for safety before calling for re-enforcement.

The hoodlums escaped through the nearby creeks, immediately they had the siren sound from the re-enforcement of security’s car, so before the arrival of Security they were all gone.

Cynthia Morgan hints on being depressed again as she “cusses the...