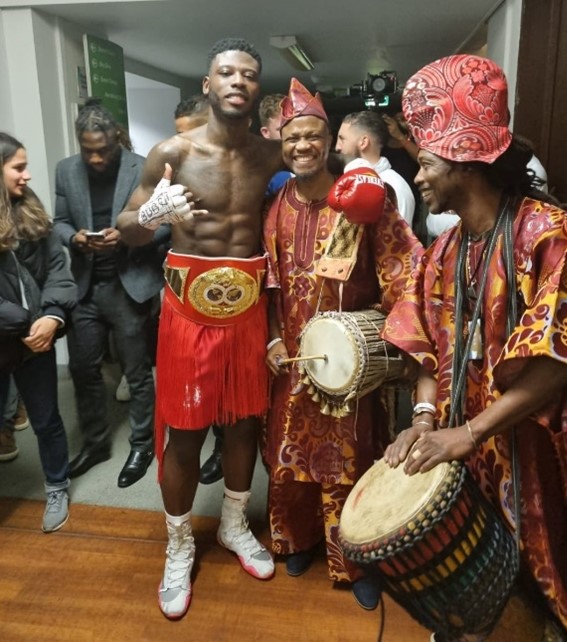 In keeping up with promoting his cultural heritage, for the second time in U.K. boxing history, last night Friday 10th December 2021, Africa’s top talking drummer Ayan De First aka Mr. Culture, was featured on U.K’s Television Channel 5 as he gave a heroic display of the African culture.

Versatile Mr Culture who has broken records in more ways than one with his style of entertainment, gave his magical performance in support of cruiserweight boxer Isaac Chamberlain, as he took on Dilan Prasovic, in a boxing match which held at the Crystal Palace National Sports Centre, London.

Throwback to March 2017,  Ayan De First became  the first ever Talking drummer to perform for a boxer during a boxing match in the U.K.  In his words, “Breaking records like glass barriers through promoting my cultural heritage, delights me and increases my confidence about our cultural heritage”.

Earlier last night before the Isaac Chamberlain vs. Dilan Prasovic boxing bout, Ayan De First had taken to his social media handles to wish Isaac Chamberlain success, calling on his fans to join him in prayers for the boxer. His post read, “Here we go again tonight, please help me pray hard for my client/brother for a great victory/success. And for a world title shot next year by God’s grace”.

Fast forward to the end of the night, it was obvious his short prayer was answered. According to the iconic drummer Ayan De First, “The spiritual power of our ancestors invoked through the talking drums helped my client close the show in just one round, by sending his opponent to sleep”.  The boxing bout ended at 2 minutes and 58 seconds into the first round, with Isaac Chamberlain emerging winner, and declared the current IBF International cruiserweight champion.

A proud ambassador of what he represents, despite the very cold winter weather, Ayan-De First stood out in his signature style, dressed in a full traditional Yoruba agbada or buba, shokoto and fila, finished with his talking drum under his arm.  Now that is what we call A TRUE AFRICAN AMBASSADOR!