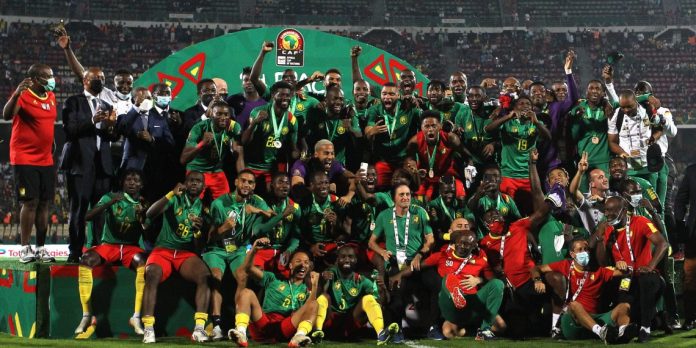 Cameroon fought back from the dead on Saturday to wrestle the bronze medal from Burkina Faso in a dramatic match at Yaounde’s Stade Ahmadou Ahidjo.

After falling behind by three goals, the Lions rallied to tie the game at 3-3 before winning the next penalty kick 5-3.

After failing to host and win, many expected the Indomitable Lions to be fired up to at least win the bronze medal as a consolation prize, given the gold was now out of reach.

But such was not the case at first, as the Stallions looked to desire the bronze medal more and upped their game to defeat the hosts.

Cameroon held the majority of the possession in the first five minutes, but it was cagey with no clear chances for either team.

Burkina Faso, on the other hand, made their first effort in the eighth minute, but Edmond Tapsoba’s header went wide.

Though Cameroon seemed to be in control, the Burkinabes were creating opportunities of their own, and their efforts were rewarded shortly before the half-hour mark when Steve Yago broke the deadlock.

A good cross from the right found its way to the back post and Yago made a late run to fire into the roof of the net and give Burkina Faso the lead.

While this was exactly the scenario when these two teams faced in the first game of the Afcon a few weeks ago, instead of drawing an equalizer, Burkina Faso increased their advantage.

Isaa Kabore went to the right byline and blasted a cross that Cameroon goalie Onana completely mishandled, dumping it into his own net.
There was a VAR check to determine if the ball had gone out, but replays plainly indicated it was still in. As a result, Burkina Faso increased their advantage right before halftime.

While one would expect the Indomitable Lions to roar back in the second half, it was Burkina Faso that furthered extended their lead through Dango Ouattarao just five minutes

Burkina Faso held on to their 3-0 lead until the 70th minute when the Cameroon revival began and Stepanhe Bahoken pulled one back for the hosts.

Though it was initially looking like Bahoken’s effort was too little too late, the Lions captain, Vicent Aboubakar, rose of the occasion once more scoring quickfire goals in the 85th and 87th minute to make it 3-3.

The game went straight into extra time but this time around, lighting struck the second time as Cameroon prevailed 5-3 on penalties to cart home the bronze medal.

Ex-model, Sarah Ofili-Adukeh shares sad story of how she lost her...