Ayoleyi Hanniel Solomon, better known by his stage name Reekado Banks, a Nigerian singer, has called out Bolt for being blasé after his producer forgot a bag in one of their drivers’ taxi.

Despite contacting customer service to lodge a complaint, the talented vocalist accused the company of failing to assist his producer.

According to Reekado Banks, the bag contains a hard drive containing his files. He went on to say that the company showed no concern or offered any assistance to improve the search.

He said; “Hello @Boltapp_ng, my producer forgot his bag in the back seat after a ride with one of your drivers on Monday (screenshot of driver’s details below). Attempts to retrieve the bag (which includes a hard drive with my files in them) have been unsuccessful.”

“Also, @Boltapp_ng, your customer support have been contacted and they’ve not shown concern or offered assistance in retrieving the items. I’m forced to share the driver’s number >> +234 901 549 0635.”

“@Boltapp_ng kindly help with the situation. Anyone else that can, thanks.” 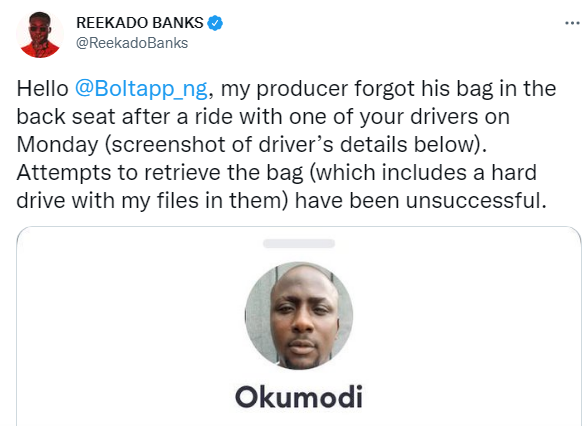