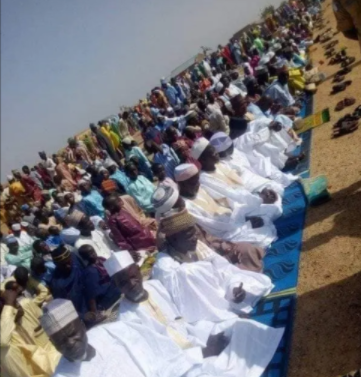 Despite Alhaji Sa’ad Abubakar, the Sultan of Sokoto’s directives, urging the Islamic community in Nigeria to continue their fast today, Wednesday may 12, Sheik Dahiru Bauchi disobeyed him by conducting Eid prayers.

The renowned Islamic scholar held Eid prayers at his residence in Bauchi state, ignoring the instruction of the spiritual head of Muslims in the country , setting a precedence others may follow in the future.

Photos shared on social media shows that one of the cleric’s children, Tijjani Sheikh Dahiru Bauchi, led the congregation with his father in attendance.

Sheikh Dahiru Usman was born on the 29th of June, 1927. He is a famous Nigerian Islamic Scholar. Sheikh Dahiru is among the leaders of the Islamic Sufi group known as the Tijaniyyah in Nigeria.

Another Islamic scholar who towed this path of disobedience is the Chief Imam of Ibadan land, Sheikh AbdulGaniyu Abubakry Agbotomokekere.

Sheikh AbdulGaniyu on Wednesday performed Eid prayers at the Ibadan Central Eid praying ground, Agodi. The Oyo State deputy Governor, Rauf Olaniyan and the Olubadan of Ibadanland, Oba Saliu Adetunji were among the special guests of honor in attendance.

This action will only encourage other Muslims to disobey higher authorities and damn the consequences (If there is any).

Defying a Sultan in Islam translates to defying Allah (God). One Sodiq Musa took to Twitter and wrote, “He doesn’t defied the Sultan, he defied Allah”

However, Umar Don Shakur disagreed with Sodiq, stating that the Sheikh did what the prophet asked him to do. He wrote, “He didn’t defied anything he is just doing what our beloved prophet Muhammad asked us to do accordingly.”

One Fumi Bells who is a Christian wrote, “Am sorry to say this. How could the fate of all the religion be decided by a person. This should be a lay down thing that won’t be changed by anybody.”

Call Me A2dz replied, “Yeah, that’s why it’s been established that the moon must be sighted before the festival.”

Explaining how the Salat day is fixed, one Saludeen wrote, “Ramadan should be 30 days (it can only be 29 days if the crescent is sighted before the 30th).. now, no moon was confirmed sighted by the Muslim community. If the sheikh claims to have sighted the moon, then he is should have shared the knowledge and evidence with others.”