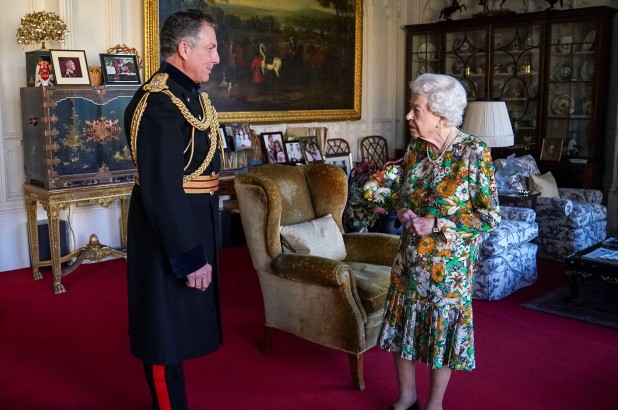 Queen Elizabeth II was back on her feet performing royal duties following a recent health scare that led to her hospitalization.

“The Queen today received General Sir Nick Carter for an Audience at Windsor Castle upon the relinquishment of his appointment as Chief of the Defence Staff,” Buckingham Palace said in a statement on Twitter Wednesday alongside a new photo of Her Royal Highness.

Wednesday’s was the 95 year-old monarch’s first in-person public engagement since spending a night in the hospital last month.

The monarch stayed in hospital for the first time in years last month for what Buckingham Palace called “preliminary investigations” into an unspecified ailment.

Doctors thereafter advised her to cancel most engagements since then.

Her health, simultaneously has come into focus.

She pulled out of the Remembrance Day ceremony at the on Sunday with a sprained back.

A palace source said the sprain that kept her out of the Cenotaph war memorial in London was unrelated to the condition which has required rest.

However, she was back at work on Wednesday at her Windsor Castle home where she was filmed chatting to Nick Carter, chief of the defence staff and Britain’s professional head of the armed forces.

He is due to step down from the role at the end of November.

“She’s alright thank you very much,” Elizabeth’s son and heir Prince Charles told reporters while on a visit to Jordan.

The queen, the world’s oldest and longest-reigning monarch, has missed a number of high profile engagements since being advised to rest, including the COP26 climate conference in Glasgow earlier this month.

The last time she had appeared at a public event was on Oct. 19 when she hosted a drinks reception at Windsor for billionaire business leaders.

Mercy Eke is all shades of hot in new photos

Filmmakers to shoot movies on trains for free – Ameachi