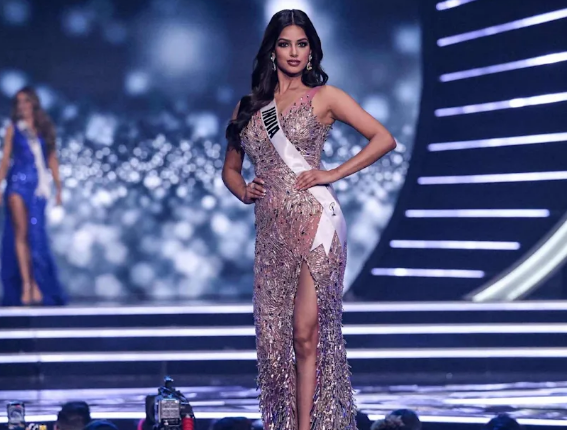 Despite winning the crown, there’s been reactions after Miss India was requested to do an animal imitation by Steve Harvey, while the other Miss Universe contenders were given the opportunity to speak about their achievements.

Many viewers were perplexed when host Steve Harvey invited one of the top 16 finalists to perform her best animal impersonation onstage, while other ladies were given the opportunity to speak about their achievements.

Miss India Harnaaz Sandhu was caught aback when Harvey said to her: “I’ve heard you can imitate a variety of animals rather well. We’d want to hear your greatest one.”

“Oh, my God, Steve, I was not expecting to do this on the world stage,” she told him.But she took it all in stride.

Sandu said that since she loved cats she would do her best to impersonate one.

“Brace yourself everyone,” she warned, before letting out a few impressive “meows.”

Many viewers were taken aback by the scene, wondering why Sandhu hadn’t been given a meaningful opportunity to speak more about herself.

Miss Panama is a young woman from Panama. Brenda Smith was allowed to describe her plans to work for the United Nations, and Miss Great Britain Emma Collingridge spoke about how learning about Medusa’s origin tale inspired her to oppose gender-based violence.

Sandhu, 21, is a proponent of women’s empowerment who has assisted her mother in teaching women’s health and hygiene at summer camps.

The pageant queen also works as an actor, and she told Insider that she has two Punjabi feature films coming out shortly.

Sandhu said she always chose strong characters because she wanted to “break stereotypes of what women are and what they can be.” “I hope I get to inspire people by following my passion and my heart,” she added.