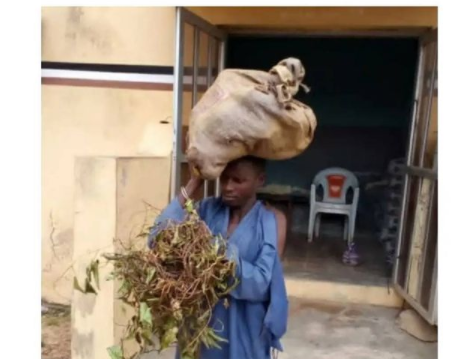 A 28-year-old man named Abubakar Bani was sentenced to six months in prison by a Kwara State magistrate court in Kaiama for stealing yam tubers.

The culprit was apprehended on August 30, 2021, at approximately 6:00 a.m. by one Ismaila Ebbo Mohammed and his neighbors of Kibefandi compound, Kaiama, according to the state’s Public Relations Officer, Babawale Afolabi.

“According to the complainants, the Fulani boy has been stealing their yams in the farm on a daily basis. The suspect, Abubakar, had confessed to having committed the crime and immediately the state commandant NSCDC Kwara State command, CC. Makinde Iskil Ayinla, gave the directive that he should be charged to court,” he stated.

“Abubakar Bani has been charged to Kaiama Magistrate Court immediately, just as the suspect pleaded guilty to the crimes. He was therefore sentenced to six months imprisonment by Magistrate Yusuf Kide, for criminal trespass and theft at New Bussa Correctional Service, Niger State.” the PPRO added.

Reacting to the story, Popular Nigerian comedian, BrodaShaggi took to Instagram and wrote, “What he did ain’t right but the judgment makes no sense. People who have murdered your own citizens are being pardoned. Zero respect for the judiciary no cap. F*ckers!”

One Titi Henessey commented, “Does this even make sense😒😒😒..have mercy on hungry people!”

One Irem Mercy wrote, “And those stealing public funds in billions are gallivanting and enjoying themselves ”

Another Instagram user wrote, “Them make they thief our money , no go prison ooo , nonsense”

BAFEM: The Most Qualified Candidate Across Board to Take Ekiti...