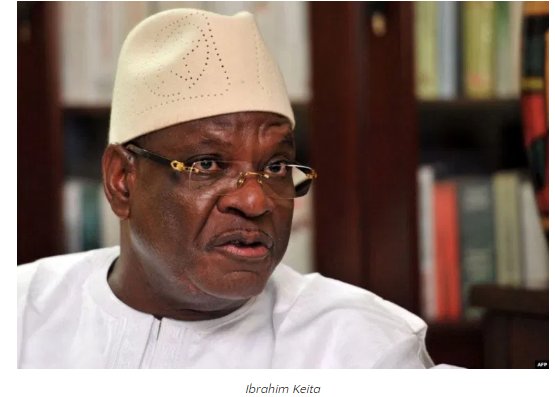 Ibrahim Boubacar Keita, the Malian president ousted in a military coup last month, was hospitalized late Tuesday at a private clinic, intensifying fears about the 75-year-old’s health after being detained for 10 days by the junta now in power. Keita’s condition was not immediately known, and it was unclear whether he would be evacuated abroad for medical treatment given the circumstances.

His hospitalization was confirmed to The Associated Press by two people at the clinic who spoke on condition of anonymity as they were not authorized to speak to journalists. The former Malian president has appeared gaunt in recent photographs, and concerns only mounted during his time in military custody in the barracks at Kati outside the capital. Keita, who was first elected in 2013, had three years left in his term when mutinous soldiers detained him at his residence after firing shots outside the house. Hours later, he appeared in a midnight broadcast on state television, telling Malians he would resign immediately so that no blood would be shed for him to stay in power. Officials from the junta, called the National Committee for the Salvation of the People, had said Keita was only being held at the barracks for his own protection. A protest movement against Keita’s presidency saw tens of thousands demonstrate in the streets in the months leading up to his overthrow. The international community has decried the ouster, and the regional bloc ECOWAS already has placed sanctions on Mali, shutting borders, halting financial flows and threatening further sanctions.

A mediation delegation led by former Nigerian President Goodluck Jonathan met with Keita while he was in military custody, and they later told journalists that Keita did not want to try to return to power. France, the United Nations and others called for his immediate release, and he ultimately was taken to his home Thursday where he remained under military surveillance. A relative told AP that Keita had been unable to see his personal doctor. Even with his release, ECOWAS has continued to press for a return to civilian rule within one year. However, the junta has proposed waiting until 2023 to hold new elections, which the French defense minister said over the weekend was “out of the question.” There is widespread fear Mali’s political upheaval could again allow Islamic extremists to extend their reach, upending more than several years of international support including a U.N peacekeeping mission that has been working to stabilize the country. After Mali’s last coup in 2012, extremists seized power in towns across the north only to be ousted the following year by a French-led military intervention. More than seven years on, peacekeepers and soldiers still come under frequent attacks from the jihadists, and the instability undermined Keita’s popularity as president.