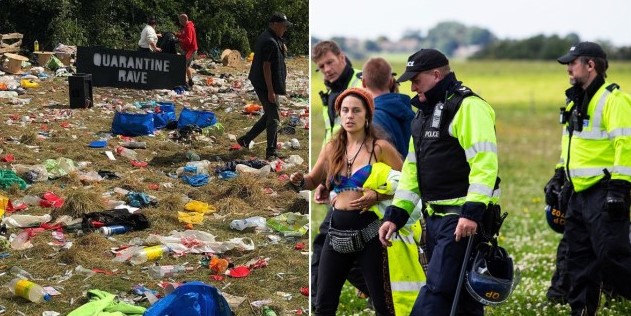 There has been confirmed reports that after an increase in unlicensed events across the country, No. 10 Downing Street is planning a crack down on unauthorised raves ahead of the August bank holiday weekend.

Presently, organisers of such illegal parties, including unlawful gatherings of 30 or more persons, face a £100 fine. People who have been fined earlier for such offence, will see the amount double on each offence – up to a maximum of £3,200. However, starting from Friday, organisers of unauthorised raves will face huge fines of up to £10,000.

According to the Metro News, the stricter rules were introduced after hundreds of illegal parties and raves have been held across the country, despite coronavirus rules.

In London, officers have been called to more than 1,000 illegal events since the end of June, with more than 200 being held in a single weekend.

The West Midlands Police shut down 125 parties and raves in one weekend, with 600 guests present in one event. And officers in Huddersfield, while breaking up an illegal rave involving around 300 people this weekend were pelted with missiles, said West Yorkshire police.

In Greater Manchester, despite stricter lockdown measures in place due to an increase in corona virus cases, police have also broken up raves, house parties and even wedding parties. A female who organised a 200-strong rave was subsequently banned from having visitors at her home for three months.

The Home Secretary, Priti Patel explained: ‘These gatherings are dangerous and those who organise them show a blatant disregard for the safety of others.’ She added that police will continue to ‘crack down on the small minority who think they are above the law’.

Metropolitan Police’s Commander Ade Adelekan added: ‘These events are hosted without regard for the safety of those attending, and police have observed cases of anti-social behaviour, sales of drugs and gang activity. ‘To the organisers of this sort of activity, I strongly advise that you seriously consider the risks you’re creating for everyone in attendance and the wider community.’

I Have Respiratory Infection – BBNaija Angel Cries Out To Fans...