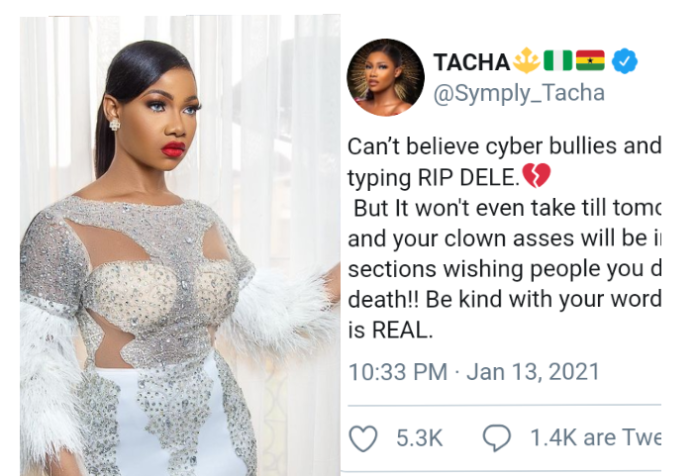 The Beautiful light skinned Port Harcourt 1st daughter, frowned at all the Nigerian cyber bullies who constantly troll people online but are now paying tribute to digital strategist Dele Bamidele who was recorded to have committed suicide after 7years of battling with depression.

Reality TV Star, Tacha said the same set of people would spend up to a day penning sympathetic posts before they begin wishing people they don’t like death.

“Can’t believe cyber bullies and Trolls are typing RIP DELE. But It won’t even take till tomorrow morning and your clown asses will be in comment sections wishing people you don’t like death!! Be kind with your words!!! Depression is REAL.

“We went through a tough 2020! It’s alarming how lessons weren’t learnt..

Tacha also went further and asked all thr social media trolls as well as the BBNaija fans how much they were paid to be inhuman while praying that nemesis catch up with people who hate and troll celebrities online.

“Tell me, How much do you get paid to be this inhuman?? I’ll double it. You go around wishing death on people, people struggling through life, People bottling themselves up!

”People only trying to survive, people who just wants a better life for themselves! all for a SHOW! A show you don’t make coins from!May NEMESES CATCH UP WITH YOU!”