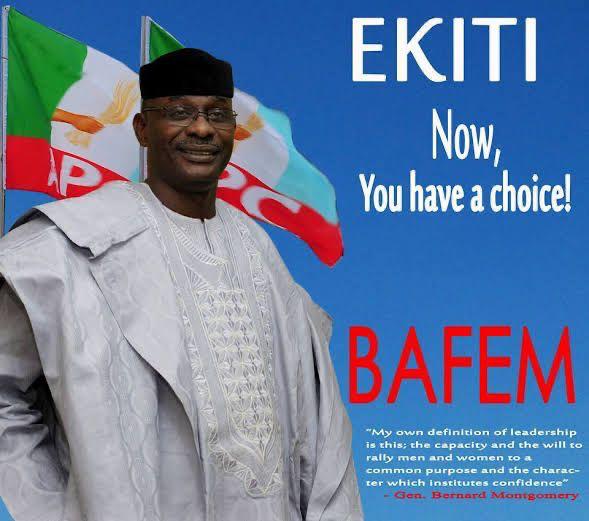 A Group of Ekiti State Indigenes in the Diaspora who are interested in Good Governance and already thrown their weight behind the Candidature of Hon. Femi Bamisile (aka BAFEM), the current member of the Federal House of Representative (Ekiti South II Constituency); have issued a warning to the Governor and the State APC Party Executives, not to impose ANY candidate on the Party members as this would Spell Doom for the party at the forthcoming Ekiti State 2022 Gubernatorial Election.

The Group (Ekiti Diaspora for BAFEM) which consists of Professionals across the State Geo-Political Zones, issued this Statement at the end of their meeting held in London on 15/01/2022.

The Chairman and Convenor of the Group, Mr. Adetokunbo Layokun in a press release said the group had no choice but to warn that the purported endorsement of Hon. Biodun Oyebanji, the Former Secretary to the Ekiti State Government by Governor Fayemi, would be a Self-imposed Disaster, the ramification of which could lead to the total annihilation of the party in the state; urging the Governor to have a re-think and tow the path of Honour, by providing a level-playing field for All the Aspirants. 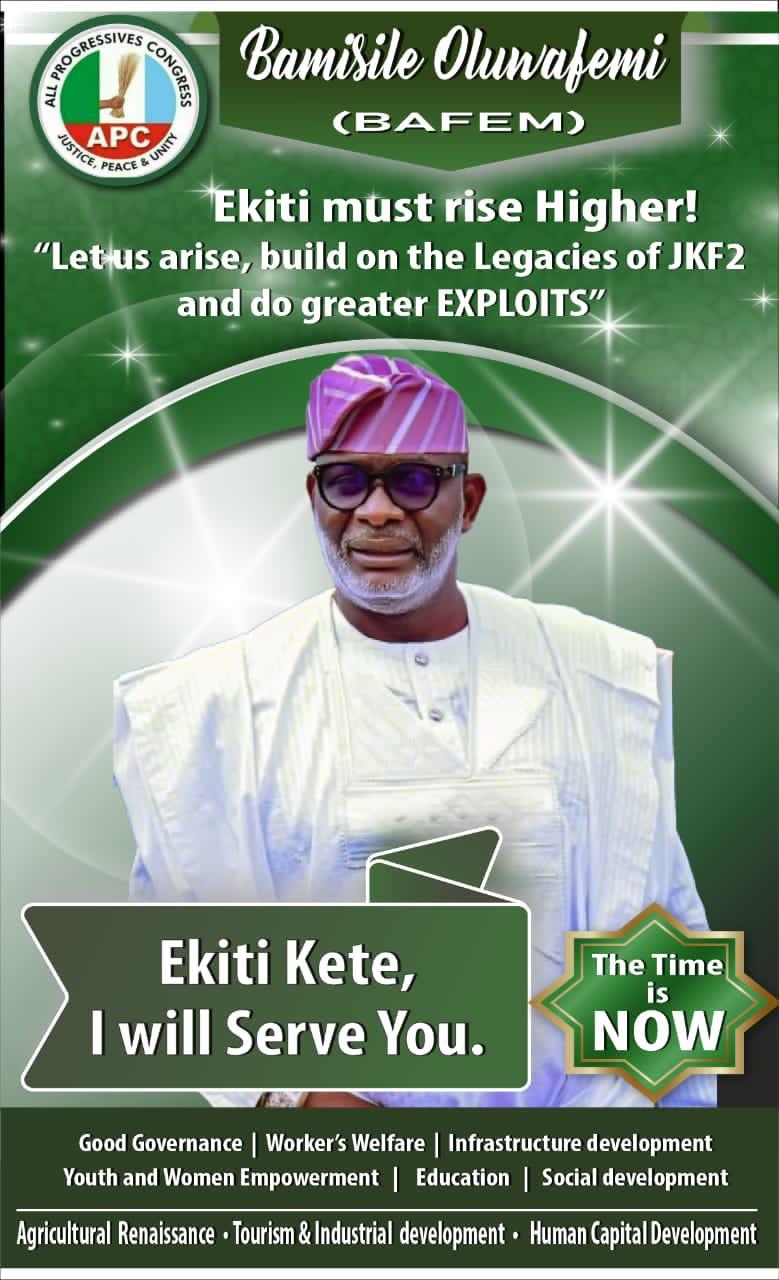 They noted with concern the use of the State Government machinery by Hon. Biodun Oyebanji and the coercion of Government Officials and Civil Servants in supporting his Candidature at Public Events, which isn’t in the interest of Fair-Play.

The Group also said that the purported support by Governor Fayemi for the Candidature of Hon. Biodun Oyebanji, also negates on the Governor’s promise during his electioneering campaign in 2018; that he would support the South Agenda and handover power to an Ekiti South indigene at the completion of his tenure in 2022.

Mr. Adetokunbo Layokun re-emphasised the Group (Ekiti in Diaspora for BAFEM) support for Hon. Femi Richard Bamisile (BAFEM), claiming he is the Most Popular and Qualified Candidate out of All the Aspirants vying for the coveted office of the Governor of Ekiti State. This he said is buttressed by the following Facts:

The mammoth crowd of people (Students, Artisans, NURTWs, Market Women, Youths, Party Chieftains/Stewarts, Delegates/Representatives from the Local Governments/Wards and General Populace) that came out to witness the Public Declaration of their Candidate and thereby brought the State Capital (Ado Ekiti) to a Standstill; testified to the fact that he is the Most Popular APC Aspirant, that commands the support of the People cutting across various strata.

The endorsement of the Candidature of Hon. Femi Bamisile (BAFEM) by Elder Statesman, Legal Luminary and Educationist – Are. Afe Babalola (SAN); Proprietor/Founder of Are. Afe Babalola University Ado-Ekiti (ABUAD) speaks volume. The Legal Icon had said BAFEM not Only had the required Educational Qualifications for the Job; but was a Trustworthy, Diligent, Forthright, Committed, Dugged Fighter and Seasoned Politician, who would bring to bare his Vast Political and Business skills, in transforming the fortunes of the State and take it to Greater Heights. The Legal Luminary went on to say that left to him and if he had the power, Hon. Femi Bamisile (BAFEM) would be installed as the Next Governor.

From his first Political Appointment till Date, Hon. Femi Bamisile had always excelled at every single task of the position that he had found himself, ensuring that he contributed to the Socio-Economic development of the People of Ekiti State.

They pointed to the Crucial Roles he played as Speaker Ekiti State House of Assembly (2007-2009) ensuring stability the House between the ACN/PDP and as APC Chieftain in 2014, preventing the total annihilation of the Party by the regime of Governor Fayose (PDP), rebuilding the Party Structure and giving Party Supporters Leadership and a sense of Belonging.

In addition, Hon. Femi Bamisile in his current role as Chairman 9th House of Representative Committee on FERMA, has brought developmental strides to Ekiti State and its indigenes in the areas of Infrastructure, Agriculture, Education, Youth & Women Development and Social Welfare, which is unprecedented.

4. Actualisation of the Ekiti South Agenda

Since the Creation of the State 25 years ago (01/10/1996), the South Senatorial Zone has not produced a Governor despite having competent indigenes.

The Marginalisation of this Zone is not acceptable and contrary to the Unwritten Agreement of the APC Founding Fathers, as restated by Governor El Rufai (Kaduna State) and Senator Chris Ngige (APC Founding Member and Current Minister for Labour and Employment), which according to both were adhered to by the APC (Ruling Party) at All Levels (Federal/State/Local Government) of Governance by the Party.

This is the reason why there is a Glamour by Faithful Party Members that the next President to succeed current President Buhari (Northerner) Must be a Southerner; hence for Equity, Justice, and Fair Play, it is now the time for the State South Senatorial Zone to produce the next Governor in the coming Ekiti Gubernatorial Election 2022.

Concluding the press statement, the Chairman of ‘Ekiti Diaspora for BAFEM’ Mr. Adetokunbo Layokun, further appealed to Governor Fayemi and the APC Ekiti State Party Executives led by Mr. Paul Omotoso, to do the Right Thing so as to adhere to the State’s Motto: Land of Honour and Integrity.

Vee, Wathoni, Trikytee and Praise up for elimination