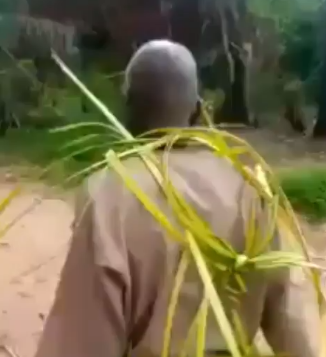 A community in Abia state has banished an old man for alleged witchcraft.

The man was banished for 20 years after he was accused of witchcraft and wizardry.

The youth and community members tied palm fronts on him and escorted him out of the community. Watch the video below:

Reacting to the post, one Yeshua wrote, “You people have done your own in the day time. Hes gonna fly back at night and cause mayhem.”

Chisaraonu wrote, “IGNORANCE AT IT’S PEAK… WHO COMMUNITY AND VILLAGE HELP FOR THIS LIFE BEFORE? IF HE WAS WEALTHY THEY WON’T BANISH HIM O”

7 figure boss wrote, “I guess banishment is for the poor. Can you banish a man that powers the streets of the village with his generator?”