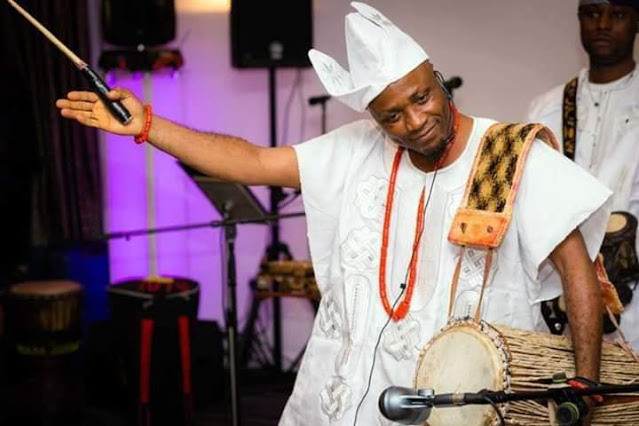 He is a true son of Nigerian soil. He is proudly African, and a great pride to Africa!  He eats, breathes and lives to promote the African culture to the world.

He is recognized as the very first Talking drummer in Europe.  He has entertained Royalty – both home and abroad, Heads of State, Diplomats, and the high and mighty.  He is the first talking drummer invited to entertain the Queen of England, Queen Elizabeth II, and her guests at her Golden Jubilee Anniversary.

Ayan De First, aka Mr. Culture, was born into a family of drummers and performers.  By divine orchestration, at the tender age of five he ventured into the world of entertainment, performing and entertaining guests alongside his father at events and in the process developing his musical talent.

As a young man, Ayan’s exceptional brilliance in Arts and Entertainment  was transparent for all to see.  With encouragement from his father, Ayan  enrolled and completed his studies in Contemporary Arts at the Ori Olokun College of Arts, before proceeding to Obafemi Awolowo University (OAU), Ile Ife – Nigeria – obtaining a degree in Dramatic Arts.

After his first degree at OAU, Ayan still yearned for super excellence in Cultural Arts.  He did not rest on his oars. Rather he enrolled for further studies at the London School of Graphics, and the London College of Arts: both higher institutions of Arts situated in the city of London.

Mr. Culture’s determination to promote his cultural heritage to the highest level in diaspora was borne from an embarrassing experience he endured, whilst busking at a London underground station during his early years in the country.  Ayan recalls with pain how he was unreservedly asked to vacate the train station whilst performing. At that point, the seed of great determination to one day showcase this same African culture to the world was sown in his heart.

Today, undoubtedly the crème de la creme of Africa’s Cultural icons in diaspora, Ayan’s life revolves around promoting the beauty and richness of the African culture at the highest levels. In 2002, Ayan De First  was invited as the first African Talking Drummer to perform for Queen Elizabeth II, on her Royal Majesty’s Golden Jubilee Anniversary.

Popular for his dynamism and versatility, Ayan’s unique style of entertainment adds a different flavour to every event.  He has performed at top venues like the Royal Albert Hall, Apothecaries Hall, Somerset House and the Nigerian High Commission London, to mention a few, for the likes of   former Nigerian Presidents Abdulsallam Abubakar and Olusegun Obasanjo; Royal Fathers – The Ooni of Ife, The Alaafin of Oyo, The Oba of Lagos; Sir Richard Branson of Virgin Atlantic and Harriet Harman.

Prince Charles, the heir apparent to the British Throne, and the legendary American singer MADONNA, have also been entertained by the thrilling performance of this iconic talking drummer.

So far, Ayan De First has appeared in all British National newspapers, and on all British Television Channels. In 2014, he gave an excellent performance with his talking drums at Television programme ‘Come Dine With Me’. To date, over 500 private and community U.K. institutions have benefitted from his teaching sessions on contemporary African art and how to play the talking drum.

In recognition of his good works, the cultural icon has his photograph displayed at the Horniman Museum, South East London. He was again recently honoured with a historical medal and made a Liveryman and Freeman of the city of London; an award ceremony, which he proudly attended  in his usual fashion style – the full ‘Yoruba’ native male design, complete with his talking drum tucked under his arm.

The Charming Magazine crew was with the indefatigable and thrilling AYANWOLE AYANTOLA (aka Ayan De First – Mr. Culture) recently for a very chilled discussion, where he shared with us the story of how it all began for him, his Vision, and his plans for  this year’s African Cultural Gala Night UK (2nd Edition).